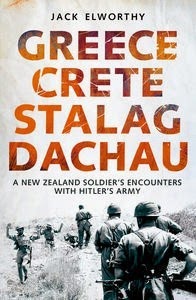 In 1940, 28-year-old Jack Elworthy left to fight in Europe. He would return seven years later, changed forever. Like many soldiers, Jack had experienced the best and worst of human nature – from kindness and bravery of Crete civilians to the unimaginable horrors of Dachau. He escaped from Greece as the Nazis rolled in, fought and was captured in Crete, and endured four years in Germany's notorious POW camp Stalag VIIIB.

Freed by American forces in 1945, he talked his way into the US Army's Thunderbird Division, which then made its way to Munich, and ultimately the liberation of Dachau. After seeing the concentration camp, he wrote of his 'disbelief that there existed a kind of people who could gas rooms full of naked people and shoot rows of kneeling men, women and children, day after day'. Jack's war was not over. Back in Britain awaiting repatriation, he devised a plan to return to devastated Europe – and succeeded, to the disbelief of MI5, who would later strong-arm him into revealing how he'd done it.

Here is the link to my chat with Mark Sainsbury this Sunday morning about Jack Elworthy's fascinating story, a truly wonderful read:

http://www.radiolive.co.nz/Graham-Beattie-Greece-Crete-Stalag-Dachau/tabid/506/articleID/46155/Default.aspx
Posted by Beattie's Book Blog at 7:32 am