A Short History of the New Zealand Wars 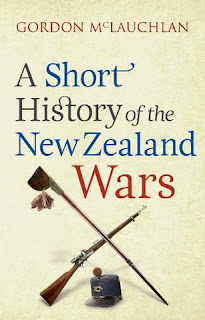 A Short History of the New Zealand Wars
by Gordon McLauchlan
The writer states that his aim was to ‘write a short, accessible story of the New Zealand wars’ in the hope that readers would gain ‘some understanding of… where we have failed and where we have triumphed.’
These worthy intentions have certainly been realised. Neither preachy nor polemical, McLauchlan presents a balanced summary of recent scholarly research on the topic.

The major incidents of the wars are outlined. For instance, we are reminded of the astonishing skill displayed by Kawiti in the construction of the pā, Ōhaeawai and Ruapekapeka, and of the fact that the Māori forces were never defeated in the north. The dispute over the Waitara block and the subsequent Taranaki Wars, and the growing wariness as to British intentions in the Waikato, are both explained.
The attempt to unite opposition to further encroachments, the King Movement, is put in context, as are the crucial battles at Rangiriri and Ōrākau. The battle at Gate Pa, ‘the most devastating defeat experienced by the British during the course of the New Zealand Wars’, is described, as is the subsequent defeat of Rāwiri Puhirake and his allies at Te Ranga two months later.

A separate chapter is devoted to two men of remarkable military genius – Riwha Tītokowaru in Taranaki/Whanganui, and Te Kooti Arikirangi in Poverty Bay/Te Urewera. These names are also associated with two of the best-known military men on the other side – Gustavus von Tempsky with the former, and Captain Gilbert Mair with the latter – and with the religious movements Pai Mārire and Ringatū respectively.
Tītokowaru again features alongside Te Whiti and Tohu in the non-violent resistance at Parihaka on 5 November 1881, when the pugnacious Native Minister, John Bryce, led 1600 constabulary against the settlement, to be met by singing children who offered them food. Bryce’s response was to order the destruction of the village and the arrest of the leaders.

McLauchlan’s focus is clearly on the conflicts between Māori on the one hand, and the British and settler (and kūpapa) forces on the other, which means that he pays only slight attention to the internecine (and at times contemporary) conflicts between Māori groups. For example, some reference is made to the first of the Musket Wars, the campaigns of Ngāpuhi led by Hongi Hika, but Ngāti Toa’s fearsome Te Rauparaha and his nephew Te Rangihaeata, notable for their conflict with (among others) Waikato Tainui, Ngāti Maniapoto, Rangitāne and Ngāi Tahu, receive a mention only in relation to the Wairau Affray of 1843 and the Hutt Valley skirmishes of 1846.

A central place is given to the Treaty of Waitangi – the misunderstandings regarding its interpretation and the way it was used to ‘justify’ confiscations after the designation and defeat of ‘rebels’. We are reminded, too, that there were always people, on both sides, who wanted peace rather than war; and of how a sense of betrayal, triggered in part by

difficulties in reconciling written with customary law, led even some of these to turn to war.
The author also discusses how for many decades after, little attention was paid either to the Wars themselves or the injustices that Māori suffered in the aftermath. It wasn’t until the late 1950s that a start was made in giving a scholarly and balanced view of the conflicts. A little later, the ‘Māori Renaissance’ of the late 1960s led to such milestone events as Dame Whina Cooper’s hikoi of 1975, the establishment of the Waitangi Tribunal in the same year, and the successful occupation of Bastion Point in 1977-78. From then on there have been determined and on-going efforts to compensate in some manner for the injustices that had been inflicted on Māori, particularly in relation to the right, guaranteed by the Treaty, to the undisturbed possession of land and other taonga. The matter of exactly what the granting to the Queen of ‘sovereignty’ (kāwanatanga) meant to the chiefs when they signed the Treaty, in particular if it meant the cession of the right to self-government, is still a matter of debate.
In the introduction, McLauchlan observes: ‘Without sincere respect for the past, we remain rootless in the present and flounder towards the future.’ This book deserves a wide readership, not the least because it encourages closer investigation of the very significant issues it raises. These events from our not-so-distant past have intrinsically shaped us, and their effects are very much with us still.