NZ Airman - From Battle of Britain Airman to POW Escapee 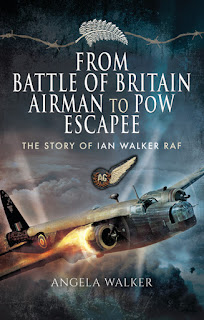 
“25 April 1941 – Twenty-six years ago today the Anzacs were fighting for their lives. Today they are doing the same in approximately the same part of the world. The odds against them are terrific. But they fight with the same unconquerable spirit as their fathers did. We are going on operations tonight. Our first trip, they call it ‘Freshman’ trip! Made careful preparations, cleaned the guns. We have all made our wills etc. Going on a raid tonight. Taking 3000lbs of bombs with us.” – Ian Walker RAF, diary entry


The 125,000 brave men who fought with Bomber Command played a significant part in the Second World War, turning the fortunes of the allies. But for decades, their pivotal role remained unsung; the legacy of the heavy bombardment of German cities and high civilian casualties towards the end of the war, which shrouded their controversial bombing campaigns. However, the airmen of Bomber Command were finally recognised for their extraordinary valour and service in 2012.


New Zealand airman Ian Walker RAF was one such airman, a twenty-year-old Air Gunner and Radar Operator with 600 Squadron. Initially tasked with defending Britain under the control of RAF Fighter Command, Ian was part of a night fighter squadron based at Manston and heralded as one of “The Few.” After the Battle of Britain, Ian transferred to RAF Bomber Command and retrained on Wellington Bombers, before joining 115 Squadron and flying scores of death-defying missions over Germany.


Three of the aircraft Ian flew in crash landed; one inauspiciously, in a field in Nazi occupied Belgium. There, Walker was captured, hospitalised and taken prisoner. But not for Ian, languishing in POW camps and hospitals. Hatching a daring plan to escape from prison with other inmates, Ian scaled the barbed wire fence and enjoyed a brief moment of liberty before being recaptured.


Good fortune followed Ian throughout the war and he was eventually placed on a list of injured men who were exchanged for German prisoners. This little-known story of the history-making exchange that took place in Barcelona in October 1943 is vividly described in From Battle of Britain Airman to POW Escapee; an audacious piece of history, in which thousands of allied and axis prisoners were safely returned to their homelands, in the midst of war.


Ian recorded this and many more war time experiences in his journals and letters. The task of turning his story into a book fell to his daughter Angela Walker, following the posthumous discovery of her father’s papers. Weaving together his candid narrative with carefully researched military history, Angela takes the reader on a thrilling journey into the heart of Europe’s theatre of war. Heart-warming, tender and compelling, Angela reveals many surprising discoveries about the man who was her father.

Through the pages of From Battle of Britain Airman to POW Escapee, we also meet Ian the civilian; a man from the Naki who was ahead of his time. With a strong philosophical and spiritual bent, Ian always embraced healthy eating and the importance of exercise. These practices helped to keep him fit and well throughout the Second World War, and also propelled him to sporting greatness. Ian was a champion cyclist, narrowly missing Commonwealth Games selection, his leg having been injured during the war. This mindset also helped to combat the trauma Ian endured during the war and the PTSD that troubled him when he returned to New Zealand.


Ian Walker’s values and outlook helped to shape and inspire daughter Angela, who chased her own dreams of sporting success. Representing New Zealand in rhythmic gymnastics at the Olympics in Seoul, she won Gold in 1990 at the Commonwealth Games in Auckland. Now, with the publication of her first book, Angela has become a writer.


The voices of Second World War airmen from New Zealand are rare and the publication of From Battle of Britain Airman to POW Escapee offers a unique and highly personal perspective on events as they happened. It also commemorates the life and career of a celebrated airman.

ANGELA WALKER was born and educated in Auckland. She completed a Bachelor of Science degree at the University of Auckland and then worked in marketing agencies in Auckland, Sydney and London. Latterly, she worked as an Athlete Life Advisor for High Performance Sport New Zealand.


The publication of From Battle of Britain Airman to POW Escapee is the culmination of a labour of love and one that celebrates an icon of endurance and survival. Angela plays the piano, keeps active and avidly follows news and current affairs. She lives with her husband and son on Auckland’s North Shore. For more, go to: https://www.facebook.com/angelawalkerauthor/.
Posted by Beattie's Book Blog at 1:49 pm