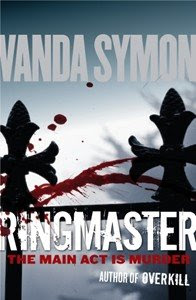 Mild-mannered suburban mum Vanda Symon is responsible for a South Island crime wave.
Review by Nicky Pellegrino, in the Herald on Sunday, 31 August 2008.

The murder rate in Dunedin is soaring and you can expect corpses to start appearing in the most unlikely places. Entirely to blame for this disturbing turn of events is writer Vanda Symon who’s chosen to set her series of crime novels in the city that’s been her home for the past four years.

Symon’s stories are classic detective fiction starring a spirited girl sleuth, Sam Shepherd. In the first book, Overkill, Sam solves a small town crime. Now in book two, The Ringmaster (Penguin, $28), she’s working in the city, on the bottom rung of police detective training, when a dead body turns up in the Botanic Gardens.

“My friends say I’ve sullied the Botanic Gardens for them,” admits Symon who’s not deterred that, in real life, murder is a rare occurrence in Dunedin. “It’s actually a really safe town but it’s got that wonderful gothic feel to it. People can imagine things like that happening here. And crime is always on the front page of the newspaper – every city in New Zealand has its seedy underbelly.”

Brought up in Tauranga and the Hawkes Bay, Symon is a former pharmacist who started writing fiction when she stopped work to have children.
“They say you should write what you love to read and I’ve always liked crime thrillers and historical fiction,” she explains. “At that point I had a six-month-old baby and a two year old and couldn’t have done the research required for a historical novel - you can’t take screaming babies into libraries. But I’m very pleased I made the choice for crime writing.”

In the finest tradition of detective fiction her heroine is a bit of a renegade, at odds with her boss, and not afraid to follow her own hunches. When she discovers a series of unsolved South Island murders is linked to the route taken by a travelling circus, Sam suspects there’s a serial killer on the loose. The circus provides a colourful counterpoint to the mechanics of police procedure and also supplies the book’s most harrowing scene. Plus there’s a burgeoning romance and a best friend Sam heads out to sink a few wines with when the going gets tough.

As a character Sam’s definitely got legs and Symon plans to develop her over the course of future books. “Originally I started writing with a male protagonist,” she admits. “It was my husband who put me onto writing about a female. He’d done something daft and I thought, I don’t understand men. Then I realised if I can’t get into the mind of my own husband how could I get inside the mind of a male character.”
Symon decided from the outset she wanted to write with plenty of Kiwi vernacular and set her stories in real places so local people could relate to the books.
“The pathway in the Botanic Gardens where the body is found really exists, for example,” she says. “And people come up to me and say they go to the same cafe as Sam and they’ve had the cinnamon pinwheel there too!”
There may not be a huge amount of crime fiction published here in New Zealand but nevertheless Symon is writing in a popular genre. Thrillers tend to dominate the international bestseller lists and our obsession with murder shows no sign of abating.

Symon doesn’t think this glut of fictional corpses is unhealthy or evidence we’ve all got sick little minds. “Reading crime is a guilt-free vicarious ride,” she argues. “People like being scared, it’s a bit of a thrill. Our everyday lives are mostly extremely dull, we go to work, look after our families – so we get that little thrill from reading.”

Unlike some crime writers, she doesn’t layer on too much gore or dwell on gruesome details. “I give perfunctory details and then a reader’s imagination can come up with far worse than I could ever write,” she says.
She works on her murder fiction when her children – now six and eight – are at school and is thrilled that both the books she’s produced so far have been sold to Germany where they’re due for release in October. Symon also writes a daily blog (http://www.vandasymon.blogspot.com/) about reading, her life and anything else that takes her fancy.

“I’m always writing in Sam’s voice so blogging gives me a chance to express myself in my own voice,” she explains. “I make an effort to do it daily and it puts me in the right frame of mind to get on with writing.”

Penguin have contracted her to write another two Sam Shepherd books so Dunedin residents should probably keep an eye out for Symon scouting round their neighbourhoods and dreaming up her next crimes. ‘Wherever I go I tend to look around the place and think, ‘oh that’s a good place to hide a body’,” she admits.
My thanks to Nicky Pellegrino and the Herald on Sunday for allowing me to reproduce this review.
Posted by Beattie's Book Blog at 2:35 pm