Luxury Apartments as the New Aphrodisiac
By JANET MASLIN writing in the New York Times
Published: September 25, 2008
In her fifth book about ambitious, covetous, pampered New Yorkers, Candace Bushnell laments the decline of art, the bitchiness of gossip and the crass commercialization of publishing. The author sounds genuinely battle-scarred. Her complaints seem to come from the heart. But if memory serves, Ms. Bushnell was part of the problem before she became part of the solution. 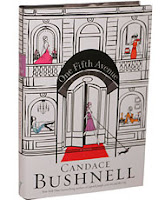 ONE FIFTH AVENUE
By Candace Bushnell
433 pages. Voice/Hyperion. US$25.95.
Remember “Sex and the City”? The characters in Ms. Bushnell’s self-promoting new novel, “One Fifth Avenue,” certainly do. They treat her big hit as a reference point and as a standard of writerly and box office worthiness. One, a conniving 22-year-old flirt, even pays tribute to Ms. Bushnell by becoming a sex columnist. But almost everyone in “One Fifth Avenue” is middle-aged and settled — and none the better for wear.
Forget shoes. Forget clothes. Forget even sex, since the creator of “Sex and the City” writes about it so awkwardly. (“That was the defining moment of great sex: when the penis met the vagina.”) Instead, the status symbols for these characters are their apartments, and ye shall know them by their square footage. The operating assumption is that those dwelling in renovated servants’ quarters are duty-bound to hate the billionaire upstairs.
Read the full review.
Posted by Beattie's Book Blog at 9:38 am