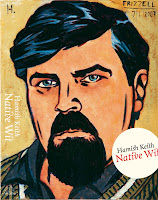 This is a huge, rambling and entertaining story by and about one of the towering and influential figures on the NZ art scene over the past 40 years, Hamish Keith.

It is also a most handsome production, superbly designed, inside and out, I note the design was done by his son Gideon Keith, a well-respected graphic designer with a number of book designs to his credit, and a real feature are the Dick Frizzell illustrations created especially for the book which open each of the 17 chapters. Frizzell also provided the portrait of the author that adorns the cover.
And the book is rich with photographs of friends and colleagues.

Hamish Keith was born, grew up and educated in Christchurch and the first third of the book is set entirely in that city. These are the years during and following World War Two and the book makes for an interesting commentary on life and social codes in Canterbury during that time. He went to Shirley Primary School, Shirley Intermediate, and then Christchurch Boys High before shifting to Christ’s College for his school certificate year.
While studying English & History in the sixth form at the latter school his talent for art was recognized and he started going to the university art school over the road to do his preliminary examination for the university’s Diploma of Fine Arts.

It was from his English master’s comment on his report that he got the title for this autobiography – “gets by on native wit unsupported by hard work”. His History master said “more concentration on the concrete and less on the abstract needed here”. He was bright but coasted through his secondary education without a lot of application.
On then to the Canterbury College School of Fine Arts at the University of New Zealand where some of his fellow students included John Coley, Pat Hanly, Quentin MacFarlane and Bill Culbert.
After graduating he then did his compulsory military training at Burnham and Waiouru camps before moving to Auckland in January 1958 as student assistant at the Auckland Art Gallery.

Thus began his long and distinguished career in the arts world.
A career that is still going strong 50 years later.
During this time he has been an art history teacher, a designer and newspaper columnist, art gallery director, unsuccessful political candidate, tv critic, President of Actor’s Equity, was six years Chairman of the QE11 Arts Council, he has authored and co-authored 10 or 11 books, he has written plays, tv and movie scripts, was involved from the very beginning in the fabulously successful Te Maori Exhibition, , worked for the Readers Digest, was on the board of the National Art Gallery, he has been a restaurant critic and columnist for Metro, the Sunday Star Times and the Listener.
Most recently he wrote and presented the major television series The Big Picture. A book by the same name was published to coincide with the TV series.

He has a great deal to say in his new book about Auckland’s consistent destruction of its building heritage and about the city’s lost or vandalized public artworks.
Hamish Keith is a renaissance man, and without any authority at all I am going to appoint him the “artistic conscience of the city of Auckland”. I am sure Mayor John Banks will approve.

While this is a book for artists and art lovers, for art students, art teachers and administrators it is very much more than that.
It is a book for those who enjoy well written autobiography, it is indeed a book for all interested in life in New Zealand from the 1940’s to the present day.
Hamish Keith has a lively and enquiring mind, he is articulate and has a sharp wit, all of which will be clear to those who read this most absorbing book.
Pic left taken at last evening's launch of Native Wit shows Hamish with Gordon McLauchlan and Gordon Dryden - a formidable trio.
Posted by Beattie's Book Blog at 12:12 pm

Following your very enthusiastic review of this book on Radio New Zealand this mornign I went out and bought a copy from my local bookseller and although I haven't started reading it yet I have browsed through it looking at those Frizzell chapter headings and all the other pictures and I have to agree with you about the physical beauty of the book.It is in itself a work of art and that seems to me to be so appropriate for this author.
Congratualtions to all those responsible. And thank you Bookman for your excellent radio review, I know I am going to enjoy Native Wit.And finally thanks to Radio New Zealand and Kathryn Ryan for the daily book review. I listen every day and my occasional book purchases and frequent library borrowings are almost always from the books you select for review.

I have to agree with Terry Johns both about the book and about Radio NZ. I bought the boo at lunchtime today afetr hearing your review and I have already read the first two chapters, I am retired so can do this. I grew up in Christchurch around the same time as Hamish Keith although I never knew him. It is so very interesting to read about those old days, and my goodness what a memory he has to be able to give us all this detail.
And yes it is a lovely book.
Thank you to Radio New Zealand for those wonderful daily book reviews and to all the interesting reviewers. I have been listening since Sharon Crosbie was the announcer and Graham Beattie was reviewing books way back then. He must be the longest serving book reviewer?
Best wishes,
Tony Johns .
(no relation to the Terry Johns,who left the previous comment,at least as far as I know)

Thank you Terry Johns and Tony Johns for your kind remarks.I am so pleased you like Native Wit. I think it is a gem of a book.

Yes Tony you are quite right, I started reviewing on Radio New Zealand many many years ago with Sharon Crosbie, not sure what year that was, and have reviewed with every Nine to Noon host since.
Back in the days with Sharon there were only about 5 or 6 reviewers and we used to take turns at reviewing five titles at once on a Friday morning. From memory we had 15 minutes. These days there are over 40 reviewers and we each review a book about once every month or 6 weeks and of course there is one review each day the programme is broadcast.
I also used to review children's books on a TV programme called Today at One which was also hosted by Sharon Crosbie. It was on TV One each weekday at 1.00pm for an hour and was broadcast live.
Thanks again for taking the trouble to write. I know the author, publishers and Radio NZ will be thrilled with your comments. I certainly am.

I am a country bookseller and have sold 4 copies of Native Wit today and three of my customers bought it because they heard your review.
Than ks Graham, and thsnkd Radio NZ, you are my heroes.