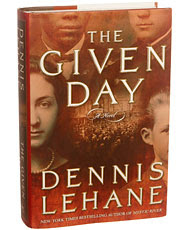 A Vision of Old Boston in All Its Angry Power
By JANET MASLIN writing in the New York Times
Published: September 17, 2008
In “The Given Day” Dennis Lehane uses “fierce-terrible” as a two-fisted Irish modifier, an archaic way of signifying tremendous angry power. He not only links the term to comically quaint Irish brogues but also demonstrates, through the gut-wrenching force of this stunning historical novel, exactly what it means.
THE GIVEN DAY
By Dennis Lehane
704 pages. William Morrow. $27.95.

No more thinking of Mr. Lehane as an author of detective novels that make good movies (“Gone, Baby, Gone”) and tell devastatingly bleak Boston stories (“Mystic River”). He has written a majestic, fiery epic that moves him far beyond the confines of the crime genre.
Shades of Doctorow and Dreiser surround Mr. Lehane’s choice of 1919 as the time for this expansive story. It is not simply the relatively unexplored eventfulness of that year that makes “The Given Day” so far reaching; it’s the relentless fierce-terrible nature of the turmoil on parade.
Read the full review here.
Posted by Beattie's Book Blog at 5:22 pm