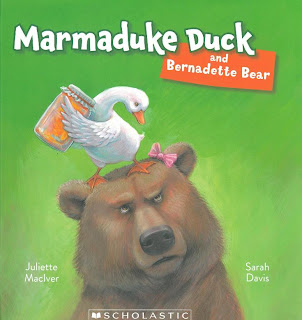 Another rollicking Marmaduke Duck adventure in which Marmaduke meets his match!

Marmaduke sets up shop and does a roaring trade selling his much-feted marmalade … then along comes Bernadette Bear who opens a honey shop next door, and takes all Marmaduke’s business! What will he do?
A delightful story about the importance of sharing and caring. MacIver’s rollicking rhyme and alliterative language reads aloud beautifully, never missing a beat with riotous illustrations by
award-winning illustrator Sarah Davis.

About the author & illustrator:


JULIETTE MACIVER
Born in Wellington, Juliette MacIver now lives to the north of the city with her husband and four children in Titahi Bay. She majored in Linguistics at Victoria University and, after working for a year as a cycle courier, she returned to university to complete a diploma in teaching English.
Juliette has spent the past nine years as a full-time mother, which she says “is a lovely thing indeed.” Writing is one of her favourite fun things to do in her “time-out”. Her dream is to make a living out of writing children’s books, so she can continue to be at home with her children when they are all school age.SARAH DAVIS
Sarah Davis grew up in New Zealand, wearing gumboots and falling in rivers. She moved to Sydney in 2004, and a year later began working part time as a freelance illustrator. She instantly realised this was what she wanted to be when she grew up, and since 2009 has been illustrating full time. She has worked with great authors, and even some famous footballers, and is lucky enough to spend her days drawing fun things like wicked pirates, crazy llamas and cowardly dogs.
Sarah was awarded the CBCA’s 2009 Crichton Award for her first picture book, Mending Lucille. Her third book, Fearless, has been shortlisted for the 2010 Book of the Year Awards, the YABBA and KOALA awards, and won the CBCA Children’s Choice Junior Judges award.
Sarah lives in Sydney with her three children, her mathematician husband, and assorted animals.
Posted by Beattie's Book Blog at 6:45 am