It happens even in royal marriages

Photo left - The Queen speaking in Victoria on her visit in 1954.


IT WAS a right royal tantrum. The front door flew open and Prince Philip charged out.
A pair of tennis shoes and a racquet flew after him. An enraged Queen appeared in the doorway, screaming at him to stop running and ordering him back.
As a fascinated Australian film crew watched, cameras rolling, the Queen ''dragged'' her husband back into the chalet in which they were staying, and the door slammed. The crew had been waiting for the Queen to appear so she could be filmed looking at kangaroos and koalas, according to a new biography of the monarch.

It was March 6, 1954, and the Queen was halfway through an eight-week tour of Australia - part of a six-month world trip after her coronation. The couple was having a weekend break on the shores of the O'Shannassy reservoir in the Yarra Ranges of Victoria.
The crew had been waiting impatiently because the afternoon light was fading.
The second cameraman, Frank Bagnall, instinctively turned on his camera when he saw the front door open and so captured the memorable marital moment.
Today, it would be a world exclusive. Back then, different rules were in play. They were enforced by a curmudgeonly courtier, the royal press secretary Commander Richard Colville. He charged out ''angrier than a wounded buffalo'', writes author Robert Hardman.
The senior cameraman Loch Townsend ''was not about to enter mortal combat with the man British journalists knew as the Abominable No Man - or, simply, Sunshine''. Townsend exposed the film and handed it over.
The Queen soon reappeared, her serene public persona re-affixed. ''I'm sorry for that little interlude,'' she told Townsend, ''but, as you know, it happens in every marriage. Now, what would you like me to do?''
The book, Our Queen, is being serialised in the Daily Mail in London and is due to be published on October 6. The Queen and Prince Philip start a 10-day visit to Australia on October 19
Read more: http://www.smh.com.au/entertainment/books/it-happens-even-in-royal-marriages-20110927-1kvi8.html#ixzz1ZBTAIQQJ

And more including and interview with Prince William and some great photographs at The Daily Mail. 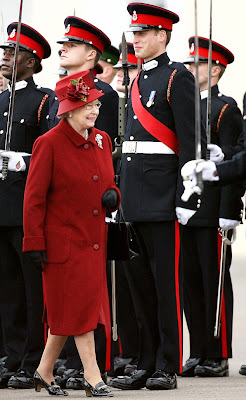 Close: Both grandmother and grandson could barely suppress their smiles as the Queen inspected Sandhurst graduates in 2006