But all that just changed with the introduction of the new Amazon Kindle Fire, a seven-inch tablet that costs only $199—less than half the price of the entry-level iPad, which boasts a 9.7-inch screen and costs $499. 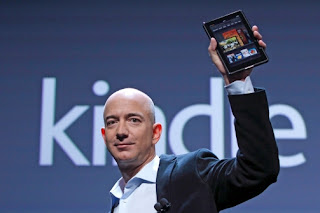 Amazon CEO Jeff Bezos (above) introduced the Kindle Fire at a lavish event in New York City, where he described it as “an unbelievable value.” “We’re building premium products at nonpremium prices,” he said.
The Kindle Fire, which will ship Nov. 15, boasts some clever touches, including a speedy new Web browser that Amazon’s engineers invented.
Amazon in the past has downplayed its rivalry with Apple, saying that Kindle and iPad were meant for different kinds of users.
But now the battle has shifted into open warfare, with Bezos even mocking Apple for forcing users to sync their iPads by connecting the device to a computer with a cable, calling that “a broken model.”
In other words, make no mistake: this is war. And the stakes could not be higher. Amazon and Apple are fighting to see who will control the world of digital media.
Full report.
Posted by Beattie's Book Blog at 8:46 am