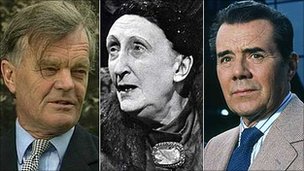 Bloomsbury Reader has launched with an initial collection of 57 titles from authors such as crime writer HRF Keating and politician Alan Clark.
Monica Dickens, great grand-daughter of novelist Charles, is among the other authors whose works are being revived. The imprint will focus on books where English language rights have reverted back to the authors or their estates.
"If people read a book by an author and they love that author, they suddenly want to read everything by that author," said Bloomsbury's Stephanie Duncan.
"That's where Bloomsbury Reader comes in because we'll be delivering all those books."
Actor turned author Dirk Bogarde, poet Edith Sitwell and Irish-born playwright and children's writer Bill Naughton are among the other deceased writers whose work will be revived.
There will be room on the imprint for the living also, including Ministry of Sound founder James Palumbo, who is releasing two novels.
The imprint will incorporate a variety of genres, including romance, science-fiction, politics, poetry and biographies.
As well as e-books, the venture is offering readers hard copies, if requested, for around £13.
Earlier this year Bloomsbury revealed that sales of e-books had soared and were changing the face of the publishing industry.
Posted by Beattie's Book Blog at 6:42 am