From The Sunday Times
August 9, 2009
New Iain Banks novel free on iTunes
Publisher Little, Brown Book Group has agreed a deal with Apple to make an audio version of the novel available as a free podcast
by Stuart MacDonald 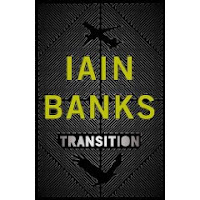 Iain Banks’s latest novel, Transition, is to become the first newly published book to be serialised internationally on iTunes.
Publisher Little, Brown Book Group has agreed a deal with Apple to make an abridged audio version of the novel available as a free podcast.
The first podcast will go live on September 3 when the novel is published. A further 22 episodes, each 15 minutes long, will be released on iTunes in Britain and America every Thursday and Saturday for 12 weeks.

The serialisation will be promoted in both the UK and the US, where the title is to be published by Orbit, as well as on the Iain Banks website, which is to be relaunched in September with a focus on building a community for fans. Campaigns are also planned around the paperback publication next spring.
According to the publisher, the iTunes promotion is about “trying something new and ground-breaking” to commemorate 25 years since Banks’s debut novel, The Wasp Factory. They said each podcast would have a “cliffhanger” ending.

The online serialisation deal is an unusual move for the 55-year-old author from Fife, a self-confessed technophobe. He is known to be reluctant to use the internet and e-mail and has sold his expensive car collection and given up flying to boost his green credentials.
“I had barely caught up with the latter half of the 20th century when here I am being ensnarled by gizmology from the 21st. I am left breathless by the pace of technology,” said Banks.

Sarah Shrubb, editorial director of Little, Brown UK’s digital imprint Hachette Digital, said: “This is the first time an audio has been serialised in this way, and we’re very excited to be doing something so groundbreaking.
“Iain Banks is one of Little, Brown’s biggest authors, and we’re absolutely delighted to be promoting him through this cutting-edge campaign.”
The full story at The Times online.
Posted by Beattie's Book Blog at 7:37 am