The New Thing: Books Without Jackets
By Leon Neyfakh writing in The NY Observer, August 24, 2009
S 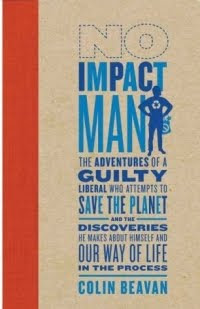 eptember will see the publication of three unusual-looking books: Farrar, Straus and Giroux's No Impact Man by Colin Beavan, Viking's Bicycle Diaries by former Talking Head David Byrne, and Graywolf's The Adderall Diaries by Stephen Elliott.
What makes these books so unusual-looking is that, even though they're hardcovers, their cover art is not printed on dust jackets but instead stamped directly onto the boards that hug their pages. The result is a handsome, eye-catching look that reflects a heightened awareness on the part of publishers that books these days cannot be counted on to simply sell themselves.
"At a time when there are other forms that people can buy books in, it becomes more important than ever for the physical book to look really attractive," said Viking's Paul Slovak, comparing the embossed orange linen case-wrap that houses Bicycle Diaries to the front of an old composition notebook. "It goes back to this point that people make, that when you have an e-book you kind of just own the file."
Most of the publishers experimenting with jacketless hardcovers, including Viking, FSG, and Graywolf, are consciously taking their cues from the folks at McSweeney's, who have been putting out beautiful books designed in this style for years. For Eli Horowitz, the managing editor at McSweeney's, the method is a means of restoring some of the permanence and singularity to the book as object.
The full story at NYO.
Posted by Beattie's Book Blog at 1:36 pm