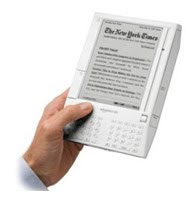 Amazon Kindle – Europe-bound?
From Stuff.tv
Well placed sources have told Stuff.tv that Amazon is working to launch the Amazon Kindle ereader in Europe as soon as the end of the IFA conference next week.
The Kindle has proved popular with bookworms in the States, but has failed to launch over here due to licensing issues, leaving British ereaders with a choice between the Sony Reader and the Cool-ER to quench their ebook thirst.However, none of these current offerings have been able to offer the Wi-fi capabilities that is the Kindle's killer feature, enabling wireless downloads of books and delivery of electronic versions of newspapers and magazines direct to the device.
It could be that Amazon is hoping to get the Kindle over here as quickly as possible in order to win over the market before the launch of Sony's Daily Edition, announced in the States yesterday.
With its Wi-fi and 3G connectivity, the Daily Edition could well give the Kindle a run for its money, but while it will launch in the States soon, Sony has confirmed to Stuff.tv that a UK launch is "at least a year away". Good news for the Kindle though, as it gives it plenty of time to get a head start on the UK market before Sony makes its way over here.
Posted by Beattie's Book Blog at 9:46 pm