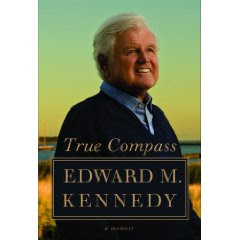 TRUE COMPASS
Edward Kennedy
Twelve - US $35.00
Pub. September
In what should be a landmark autobiography, five years in the making, the late Senator Edward M. Kennedy tells his extraordinary personal story--of his legendary family, politics, and fifty years at the center of national events. ...
Being published under the Twelve imprint (Hachette US) and due for release next week.
Hopefully the late Senator Kennedy would have seen advance copies before his death this week.
There will be a huge demand for the book I have no doubt and one suspects that the publisher will have already rdered the first reprint. Personally I can't wait to read it...........
Posted by Beattie's Book Blog at 2:13 pm