Mackay wins Kelpies Prize
27.08.09 - The Bookseller
Janis Mackay’s novel Magnus Fin and the Ocean Quest has won the 2009 Kelpies Prize. The announcement was made at the Edinburgh International Book Festival.
The Edinburgh-based publisher Floris Books re-launched the Kelpies Prize in 2004. It is awarded annually to encourage and reward new Scottish writing for children. 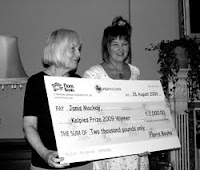 Mackay received a cheque for £2,000. Her book will become the latest release in the Kelpies imprint published on October 22nd, 2009.
Posted by Beattie's Book Blog at 9:56 pm