The owl always hunts at night 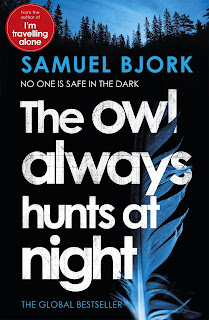 
When a young woman is found dead, the police are quick to respond. But what they find at the scene is unexpected. The body is posed, the scene laboriously set. And there is almost no forensic evidence to be found.

Detective Mia Krüger has been signed off work pending psychological assessment. But her boss has less regard for the rules than he should. Desperate to get Mia back in the office, Holger Munch offers her an unofficial deal.

But the usually brilliant Mia is struggling and the team are unable to close the case. Until a young hacker uncovers something that forces the team to confront the scope of the murderer’s plans and face the possibility that he may already be on the hunt for a second victim.
About the author:
Samuel Bjork is the pen name of Norwegian novelist, playwright and singer/songwriter Frode Sander Øien. The Owl Always Hunts At Night is the second in his Munch and Krüger series, I'm Travelling Alone was the first. Both have been bestsellers across Scandinavia and the rest of Europe.