The incredible story of Phar Lap, the racehorse that became a champion, and then a legend - told for the first time in novel form 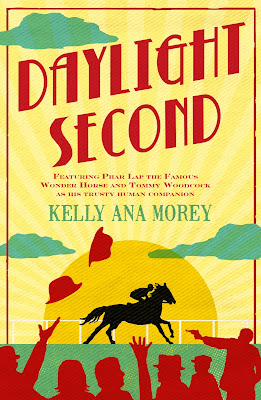 
‘Phar Lap first, daylight second.’ That’s what the race callers would say when Phar Lap crossed the finished line lengths ahead of the next horse.


Born in Timaru on 4 October 1926, Phar Lap’s racing career would become  legendary – after a slow start, he won 57 races including the Melbourne Cup two Cox Plates and the Agua Caliente Handicap, with the largest prize money offered in Northern America at the time.


Phar Lap captured the imagination of the public of a nation during the tough years of the Depression, and became a national icon in Australia and New Zealand.  While Phar Lap’s brief life was the stuff of legend, the cause of his death remains a mystery. Was it colic or was it the result of arsenic poisoning?  The debate goes on.

Daylight Second is also the title of a new novel by one of New Zealand's most audacious writers, Kelly Ana Morey.  Part richly imagined biography, part portrait of two marriages, Daylight Second is also the story of the people who knew the champion race horse as Bobbie; his trainer Harry Telford and beloved strapper Tommy Woodcock, and the two very different women who would become their wives.


Daylight Second brings to life the excitement of the track, the highs and lows of the racing game, and the challenges faced by urban working-class Australians between the wars. It is storytelling at its very best.
About the author:

Kelly Ana Morey is an award-winning writer of both fiction and non-fiction. Her first novel Bloom won the 2003 Hubert Church (New Zealand) first novel prize and her second Grace is Gone was a finalist in the Kiriyama Award for Fiction (USA) in 2004. She was the recipient of the inaugural Janet Frame Award for Fiction in 2005. Daylight Second is her fifth novel. She lives in New Zealand and always has a thoroughbred mare or two in the paddocks at home.
Posted by Beattie's Book Blog at 7:16 am