The Enterprise Behind Dr. Seuss 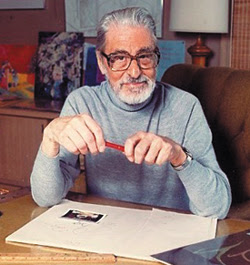 Audrey Geisel, widow of the late author Theodor Seuss Geisel, was cleaning out her husband’s office in their La Jolla, Calif., home in 2013, when she and Ted’s secretary and friend, Claudia Prescott, rediscovered a box filled with pages of text and sketches in various stages of completion. The material had originally surfaced during a remodeling project shortly after Geisel’s death in 1991. Rather than being sent to the Dr. Seuss Collection at the University of California–San Diego with the rest of the author’s papers, it had been set aside. 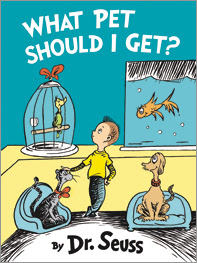 Among other treasures, the box contained a full manuscript of an unpublished picture book, What Pet Should I Get? On July 28, Random House Books for Young Readers will release the title, representing the first completely original new Dr. Seuss book since the publication of Oh, the Places You’ll Go! in 1990, with a one-million-copy first printing.
“It’s really a significant moment in not only the Dr. Seuss publishing program but in children’s books,” says Barbara Marcus, president and publisher of Random House Children’s Books. More

And story at New York Times
Posted by Beattie's Book Blog at 6:49 am