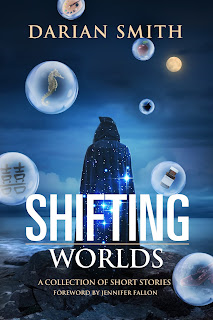 The author of Currents of Change, a paranormal ghost story set in rural New Zealand, Darian’s Smith’s latest work offers its own share of demons. Releasing in August 2015, Shifting Worlds is an anthology of sixteen diverse stories, including both literary and speculative fiction, all deep, relevant, and extremely readable.

The collection includes a zombie story with some unlikely heroes, set alongside a harrowing tale of miscarriage and despair. There is Slippery Road, a story about tough life choices, Girl in the Window a classic off-world tale, with elaborate world-building and a twist I didn’t see coming, and Recession, a favourite of mine, Smith’s chilling story of hard times which first appeared in the charity Baby Teeth: Bite-sized Tales of Terror.

Some of stories have been previously published, several are competition winners, and three have earned Smith a place in the finals of New Zealand’s Sir Julius Vogel Awards, so readers can be confident that they are well-written and engaging. Indeed, the stories are full of poetic imagery: a pack of bullies is “a beast with four heads”, the hospital has “intestinal corridors” and Mum wears “the bruise of the week” on her cheekbone. Yet this is not simply a book of enjoyable yarns, although they are that. As Smith states: “Stories are often a way to process an emotion or experience – to extrapolate it to a fuller conclusion in a way we wouldn’t dare to do in real life.  They are literally … where the author’s demons hide.” If what Smith says is true, then this collection is haunted, a sideshow of the demons with which the author does battle in his every day journey throughout adulthood. Take Atrophy, for example: this story was written when Smith’s wife was diagnosed with muscular dystrophy. It asks the question “Am I going to stay for this, or leave and build a ‘normal’ life elsewhere?” Not a comfortable theme by any means, but Smith dares to explore it, and he does it well, in a brutal and poignant testimony to the woman who is his muse.
Another example is Double Happiness a story of promise and loss, which explores the relationship between an immigrant Chinese calligrapher and his wife. This story, in particular, resonated for me, as the granddaughter of an immigrant Chinese general and his young opera singer wife. I mentioned to Smith the impact the story had had on me and learned that Smith’s wife had a hand in its development: “That was a challenge to write—it was before Adrienne and I had recognised our pattern: I come up with an idea, she thinks it’s naf, I write it and she loves it after all. So, she was saying it sounded lame and was it smart for a white guy to be writing an Asian immigrant perspective anyway? And I was stubbornly pushing ahead.” I find it interesting that a throwaway comment from someone whose approval counts can be enough to make a determined writer pull up his sleeves, do his research, and write something exceptional.
For me, this was further evidence that in Shifting Worlds there is a story in the spaces, in the pauses between where one story ends and another begins, in the ellipses, and in the margins.
More than the sum of its parts, Shifting Worlds tells of a writer’s inspiration, and how, if he tries hard enough, a man might just be able to move the world with the power of his imagination.
With a foreword by Jennifer Fallon, the author of well-known works such as The Demon Child Trilogy, The Hythrun Chronicles, and The Tide Lord Quadrilogy, Shifting Worlds is a superb collection from one of New Zealand’s emerging talents. Highly recommended.
Publisher - Wooden Tiger Press
Lee Murray is a five-time winner of the Sir Julius Vogel Award and holds an Australian Shadows Award (with Dan Rabarts) for Baby Teeth: Bite-sized Tales of Terror (Paper Road Press).