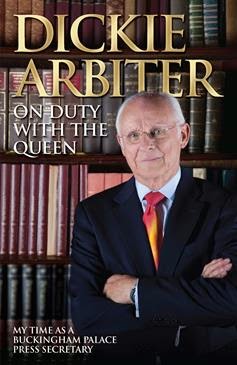 From 1988 to 2000 Dickie Arbiter was a press secretary for the Queen, working out of Buckingham Palace. He was at the forefront of all things Royal and had the privilege of working alongside the Queen, the Duke of Edinburgh, the Prince of Wales and the late Diana, Princess of Wales. This was arguably one of the most turbulent periods in the history of the modern British monarchy.

With unprecedented access to some of the most notable figures of our time, Dickie’s memoir On Duty with the Queen will convey what life was like behind the scenes at Buckingham Palace. He shares his personal stories and memories, bringing life and colour to events much read about, along with a warmth to the royals that has never been seen before. The book covers some of the saddest, bleakest times for the monarchy, including the divorce of the future king and the death of Princess Diana.

Responsible for media managing ceremonial occasions, it fell to Dickie to coordinate the media coverage of the funeral for Princess Diana. His account of the week leading up to her funeral will leave no reader dry eyed or unmoved as he reflects on a nation’s loss and the ways in which people came together to pay their respects and celebrate her life. He also offers an insight into how the royal family dealt with their grief as a family and in private.

Bringing readers the ultimate insight into the royal family during his twelve years as press secretary, Dickie reveals first-hand his experiences and personal relationships with many of the royals. It’s a career few people dream of and now Dickie shares his incredible story with fans of the British Royal Family the world over.

Extract from the opening chapter of On Duty with The Queen by Dickie Arbiter.

‘If you were approached to join the Palace press office to look after the Prince and Princess of Wales, would you be interested?’ It was Friday 15th April 1988 – the eve of my departure for Australia, where I would be covering the Queen’s bicentennial tour for IRN (Independent Radio News) that I received the phone call from Philip Mackie, one of the Queen’s press secretaries, which would radically change my life. Perhaps it was his distinctive Scottish brogue, difficult to decipher at the best of times.  Or maybe what I’d heard him say couldn’t be what he’d actually said.  I asked him to repeat the question, and much to my astonishment I had heard him correctly.’

About the author
Previously Court Correspondent for IRN, Dickie was a poacher turned gamekeeper when he moved to work at the Palace in 1988. A regular public speaker with over four decades of experience covering royalty as a broadcaster, journalist and Royal Press Secretary, he is seen regularly on the BBC, ITV, C4, C5 and Sky in the UK. He also appears around the world on all the major news networks in Australia, Canada, France, Germany, Italy, Japan, South Africa, New Zealand and the USA, where his daughter Victoria Arbiter works as CNN Royal Correspondent. Dickie is also the only Royal Commentator who has witnessed both the Coronation of Queen Elizabeth II and her Silver, Golden and Diamond Jubilees.