When Kate Greene was diagnosed with terminal cancer she had to come to terms with knowing she would never see her sons grow into men.
Nevertheless, intent on being a lasting presence in their lives, she drew up a 'mummy's manual' to guide them and their father after she passed away.
Now grieving widower St John Greene, 45, will be able to realise nearly all his late wife's dying wishes with a £100,000 deal to publish a book based on the heart-wrenching list. 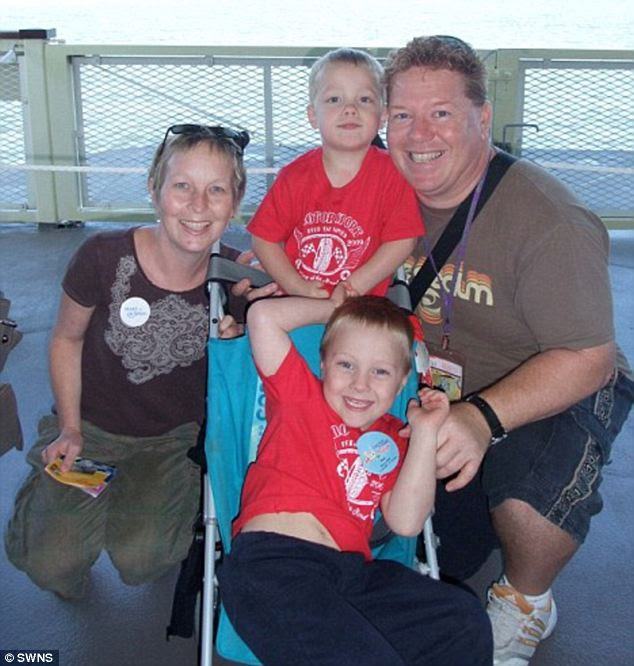 Tragic: St John and Kate Greene with their sons Reef and Finn on a trip to Disney World, Florida. Mr Greene has won a £100,000 deal to publish a book based on the 'mummy's list' she drew up in the weeks before her death
The emotional document, written by Mrs Greene in the weeks before her tragic death aged 37 from breast cancer, is already tipped as a bestseller when it hits the shelves next month.
The wish list ranges from the humble 'buy Orange Club Biscuits regularly', to the poignant 'always kiss the boys goodnight', and the adventurous 'take the boys diving in Belize'
She outlines the basic principles Mr Greene should instil in Reef, seven, and Finn, six, such as to be always on time, to treat girlfriends with respect and to make up after a row.
Mr Greene, from Clevedon, Somerset, said: 'She knew what she was doing when she wrote the list. She wanted to make sure she was always there for the boys in some form.
'She knew if I bought orange Club biscuits each week for example, they would be reminded each week that they were her favourites. It was a way to keep the memories alive.
'She asked that I take the boys back to the beach in South Wales where she used to love to take them crab fishing, she asked that I buy a dining table so we can have proper family meals at least once a week, she asked me to make memory scrapbooks with the boys and keep their certificates in special achievement boxes.
'These are all things I’ve managed to tick off the list in the last couple of years. But now with the publishing deal, there are plenty of things out-of-our reach before that can become a reality.
'First on the list is a trip to Belize. It was somewhere we wanted to go as a couple to dive before the boys were born, but we never got around to it.
'So Kate said, "If you can’t take me there, you can at least take a couple of bits of me - you can take the boys".'