Science Will Save Us -By JAMES PARKER - The New York Times -Published: February 24, 2012 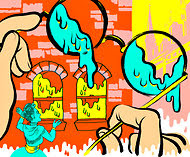 “Tell us where you get your ideas!” we demand of the talented and interesting writer. “Oh, the imagination on you! How do you do it?” He demurs, disclaims, and we note a modest fluffing-up of authorial plumage. He knows how wonderful he is. But good prose is so much less of a mystery, finally, so much less of a shock, than bad prose. Good prose, after all, relates to our shared essence: we know it when we read it, we assent to it, we get it. Bad prose, on the other hand, is arrestingly weird. It stops the clocks and twists the wires. It knits the brow in perplexity: What the hell is this? What’s going on here?
Illustration by Kris Mukai

To the narrative, anyway: The year is 1868, and the captain is incredulously extending his spyglass in the direction of Boston Harbor, where a disaster is unfolding. Schooners and pleasure steamers and barks, their compass needles all awhirl, are crashing into one another and sinking. Some malignancy has fritzed the instruments! A couple of days later, on State Street in Boston’s busy financial quarter, all the windows spontaneously melt. And not just the windows — clock faces, tumblers: “The glass lenses in his eyeglasses sank into his eye sockets and left him flailing.”
Panic in the streets. A nasty stockbroker, behaving rather like the Duke brothers at the climax of “Trading Places,” barges through the plebs, crying: “My assets! Out of my way!”
Full review at The New York Times
Posted by Beattie's Book Blog at 6:11 am