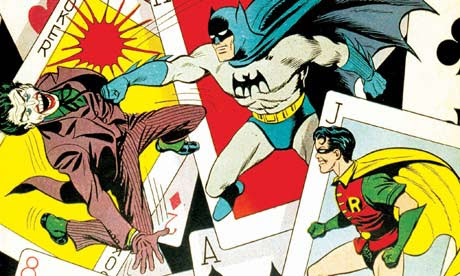 Batman's utility belt doesn't really compare to the superpowers of Spider-Man and Superman, but Gotham City's caped crusader has nonetheless been named the greatest comic hero of all time.

The readers of Comic Heroes magazine voted for Batman, the alias of billionaire Bruce Wayne, as their top comic hero, ahead of the second-placed Spider-Man and the third-placed Superman. The magazine is not the first to rank heroes from the world of comics: in 2008 Empire magazine put Superman top, followed by Batman and John Constantine, the exorcist created by Alan Moore, while the Man of Steel also topped a list from IGN.

But Comic Heroes editor Jes Bickham said it was "no surprise" that Batman came in at No 1 as the character, created in 1939 by Bob Kane and Bill Finger, was, "quite simply, the coolest and most interesting superhero ever created". He even, pointed out Bickham, has a butler.

Batman "doesn't have superpowers; he gets by with his mind, his wit and his physical abilities. He's dark, conflicted and tragic, yet never less than the best of us. He's got the best costume and the finest gadgets," said the editor. "His rogues' gallery is the most frightening and freakish collection of villains ever assembled; a cavalcade of criminality unmatched in modern comics. He's also strong enough to fit almost any story, being constantly remoulded by writers and artists since his creation in 1939."

Wolverine, the adamantium-clawed mutant from X-Men, comes in fourth in Comic Heroes' top 10, followed by Judge Dredd. Tintin makes a surprise appearance in sixth place, with the list rounded out by Captain America, a token woman in the shape of Wonder Woman, The Spirit and The Thing.