“Come and have a go if you think you’re Bard enough...” 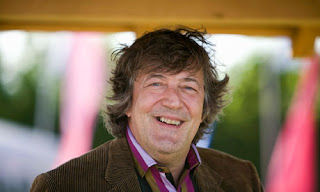 Stephen Fry (above-Getty Images), Andy Serkis and Bret McKenzie are just some of the stars who have joined the 2012 New Zealand International Arts Festival’s Shakespeare online video project, Bard Enough.
The New Zealand International Arts Festival is creating New Zealand’s first ever series of crowd-created Shakespeare speeches. For the first video, “To be, or not to be” they enlisted the help of international and local actors, television personalities and presenters.
The Hobbit actors Stephen Fry and Andy Serkis are joined by some of Aotearoa’s finest and funniest: Academy Award-nominated comedian Bret McKenzie delivers his lines alongside 2012 Festival artists Rāwiri Paratene (Whale Rider), Michael Hurst and Te Kohe Tuhaka. Stars of the small screen include TV3 news anchors Rachel Smalley and Hilary Barry.
“We are blown away by the response we’ve had from those we approached. That stars of this calibre are involved in our fun little Festival project is phenomenal,’’ says Festival Executive Director Sue Paterson. “We hope they will inspire New Zealanders to get involved for the next video in the series!”
Fry, who has nearly four million followers on Twitter, opens the speech, which was posted today on the Festival’s YouTube channel: http://www.youtube.com/NZIAF
The Festival will cut two more videos, this time featuring members of the public. The next speech, “Once more unto the breach” is from Henry V, featured this year’s Festival (opening Wednesday), performed by acclaimed UK all-male Shakespeare company, Propeller.
The Festival is shining the spotlight on Shakespeare with five productions: Pan Pan’s The Rehearsal, Playing the Dane, which closes this Tuesday; Hurst’s Frequently Asked Questions at Downstage from Friday; Propeller’s double bill The Winter’s Tale and Henry V; and Paratene stars in a free outdoor Te Reo production in Te Papa’s amphitheatre: The Maori Troilus and Cressida.
Bard Enough encourages everyone to be part of the Festival – by adding their line to one of a series of speeches which are edited together and shown on the Festival’s video channel: TelstraClear Festival TV. The public can be filmed by the Festival’s TV crew before or after a show, or upload their own line to YouTube and alert the Festival via Facebook or Twitter. The channel will also show behind-the-scenes interviews with Festival shows, feedback from audiences and production footage.