Rising Talent to the Fore Among Awards Finalists
Emerging authors and illustrators have made every category of the New Zealand Post Children’s Book Awards this year – competing alongside well-known names for top honours.
Finalists were announced today by Gillian Candler, convenor of judges for the Awards.
“The judges were excited to see the emergence of talented new writers and illustrators, with each category having at least one new author or illustrator short-listed.”
In selecting the finalists, the judges consider not just the content, the story and illustrations, but also the quality of production.
“We’re looking for great quality books that will grab children and make them want to read and the judging panel unanimously agree each of this year’s finalists do exactly that.”

For the first time this year, a Young Adult Graphic Novel – Shaolin Burning by Ant Sang (pic right) – is a finalist in the Picture Book category which is generally dominated by books for the very young.
Ms Candler stated that the judging criteria mean that illustrated books are judged in either the Picture Book or Non-Fiction categories.
The finalists were selected from more than 130 children’s books published in New Zealand in 2011 and submitted for the awards.
Winners will be announced at a ceremony in Wellington on Wednesday 16 May.

Ms Candler, an independent publishing and education consultant is joined on the judging panel by two other children’s literature experts: school curriculum advisor, librarian and bookseller Annemarie Florian and award-winning writer and illustrator Bob Kerr.
As well as winners in each category, the judges will also decide which author will earn the New Zealand Post Children’s Book of the Year prize. 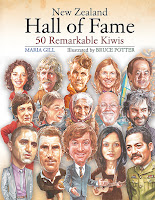 Calling the Gods by Jack Lasenby (HarperCollins Publishers)
Dirt Bomb by Fleur Beale (Random House New Zealand)
Sacrifice by Joanna Orwin (HarperCollins Publishers)
Yes by Deborah Burnside (HarperCollins Publishers)
Children’s Choice Award
Voting for the Children’s Choice Award begins today.  Long considered one of the highest accolades a children’s author can receive, this award is voted on by children of school age from all over New Zealand.  Vote online at www.nzpostbookawards.co.nz or by using the special voting card available from bookshops, libraries or schools. Voting closes at 5.00pm, Friday 27 April.
New Zealand Post Children’s Book Awards Festival
Finalists will participate in children’s book events around the country as part of a nationwide celebration of the New Zealand Post Book Awards. The festivities, which are a huge favourite with kids all over the country, begin on Monday 7 May and continue through to Wednesday 16 May.