I’ve always preferred to read a book before watching the movie adaptation as I like to see the characters and places in my own mind’s eye rather than being stuck with the director’s vision. So with the film of David Nicholls’ best-seller One Day due for release next month I thought I’d better crack on and read the newly released tie-in edition (Hodder, $29.99). 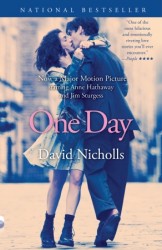 I guess you’d categorise One Day as chick-lit although that term often gets used in such a sneering, book-snobby way these days I’ve become reluctant to employ it at all. And this isn’t a dumbed down story, in fact its structure is very clever. Spanning 1988 to 2007 the novel takes us inside the lives of its two main characters, Emma Morley and Dexter Mayhew, on the 15th of July of every single year.
When the story opens they are in bed together having a one-night stand on the night of their university graduation. Emma is bookish and quirkily beautiful, Dexter handsome and a bit of a player. The pair of them are looking towards their futures, wondering where they’ll be by the time they’re 40.
A friendship develops rather than a romance. As the years pass, they strike out in different directions but always stay in touch. Serious-minded Emma has a flirtation with theatre then gets stuck in a dead-end job in a Tex Mex restaurant. The more carefree Dexter goes travelling and ends up in television.  Dexter gets famous, becomes TV’s golden boy and goes off the rails. Conscientious Emma grows up and starts buying furniture. Despite their differences, the attraction between them simmers never quite reaching full boil. Their relationships with others fail but their friendship somehow survives, their lives intersecting time and again as they head towards 40.
I’m against spoilers so won’t give away the ending but I can say that there’s a big jolt coming and I didn’t expect it at all.
This is a story that could easily have been told in a trite and corny way. But Nicholls has done a brilliant job with it. He unfolds the narrative at a leisurely pace, letting us properly get to know Dexter and Emma so that, while there’s a fair amount of stereotyping going on, they seem like real and relatable people. All of us have lived through stuff like this: we’ve had long friendships that have waxed, waned and shifted, have wasted time in the wrong jobs or in the wrong relationships. Dexter and Emma’s story seems real. Moving at times, always entertaining and often funny, it reflects the lives of a whole generation. And I really liked the format – the regular annual date with the characters – which the author has described as being a little like looking through a photo album.
If you’ve never encountered Nicholls’ work before then I’d describe him as very much in the vein of Nick Hornby or Jonathan Tropper – both are known for their emotionally truthful, comic writing.
The movie version of One Day stars Anne Hathaway and Jim Sturgess and has the potential to be a stinker. The trouble is if you lose all the subtleties of the book, the offbeat humour and the sheer humanness of the characters then you’ll lose the magic too and what you’re left with is a standard light romantic comedy.
Having watched the trailer that’s certainly what it smells like. So take my advice and read the book first.

She is also the Books Editor of the Herald on Sunday where the above review and the following Bookwatch column was first published on 7 August, 2011
Book watch
An Uncertain Place by Fred Vargas (Vintage $39.99).

Being on holiday in Paris I decided I should read fiction set there.
Fred Vargas is a best-selling author in France as well as an historian and archaeologist. She’s won the CWA International Dagger a record three times, her books are translated into 38 languages, and she has a reputation as one of the very best contemporary crime writers. In her latest novel her flawed but most engaging cop, Commissaire Adamsberg has left Paris for a police conference in London, accompanied by anglophile Commandant Danglard and Estalere, a young sergeant. The city offers a welcome change of scenery until a gruesome discovery is made just outside the gates of Highgate Cemetery - a pile of shoes, all containing severed feet.
Returning to Paris, the three men are then confronted with the violent killing and dismemberment of a wealthy, elderly man. Both the dead man’s son and his gardener have motives for murder, but soon another candidate for the killing emerges. As Adamsberg investigates the links between these two unsettling crimes, he puts himself at huge risk.
Vargas’ stories are always complex and I find her crime fiction quite different to any other I read. Highly recommended.
Consolation by Anna Gavalda (Vintage $29.99).

This is Anna Gavalda’s third novel. A mother of two, she lives and writes just outside Paris and this book was the best-selling French novel in the year it was published there.


Charles Balanda is a successful Parisian architect who leads a stressful life. Relations with his routinely unfaithful partner Laurence are strained largely because he shys away from emotional confrontation, but also due to his frequent business trips to Moscow where he is having to cope with an exceptionally difficult building project that he is supervising. He also has a troublesome and moody teenage stepdaughter whom he loves as his own but who is constantly giving him grief. I found him rather unlikeable initially but in the end he redeems himself and overall the book made for a cheering holiday read.
Reviewed by Graham Beattie a former publisher who blogs daily about books at beattiesbookblog.blogspot.com
Posted by Beattie's Book Blog at 4:17 pm