Take a leaf out of New York's book: Invest in your libraries, don't close them 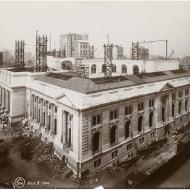 London should be investing in its libraries as vital community assets in times of economic hardship instead of closing them, the chief of New York's biggest library service said today.
Christopher Platt, director of collections and circulation operations at New York Public Library, which operates 100 libraries, spoke as the Evening Standard's Save Our Libraries campaign is getting behind Londoners fighting to keep their local branches open in the face of public spending cuts.
St James's Library in Westminster closed its doors for the last time this week, the latest victim of council belt-tightening.
The Standard campaign is supported by authors including Zadie Smith, Will Self and Martina Cole. But despite regular protests across London - and even a High Court judicial review of Brent council's decision to close six of its 12 libraries - dozens across London are still at risk of closure and some are set to be run by volunteers.
Mr Platt said cutting services, hours and staff or having libraries run by volunteers should be "a last resort", and that at times of financial difficulty New York libraries have found they are needed more than ever, leading them to lobby hard for public funding and improve rather than cut services.
"Ten years ago, after 9/11 we faced cuts and as the economy has changed in the last few years we have had budget challenges," he said. "The way we were able to lobby successfully for funding was that we offer a brilliant service that our users rely on."
Opening hours were increased and services were targeted at the community's needs. More books were stocked and educational classes were offered tailored to what New Yorkers required in a recession. Many people confirmed to researchers that they needed their community library more when times were tough. The unemployed, in particular, said it was somewhere to go to feel more "normal".
Visits to local libraries in Manhattan, the Bronx and Staten Island soared from 11 million in 2005 to more than 15 million in 2009.
Full story here.

Posted by Beattie's Book Blog at 9:56 am