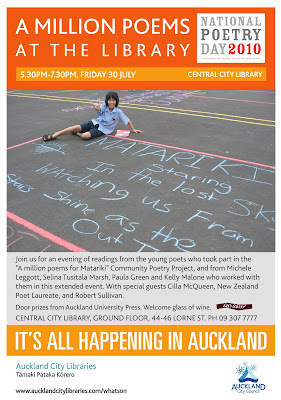 Students from Auckland schools will join a line-up of leading New Zealand poets for an event at the Auckland City Library as part of National Poetry Day on 30 July 2010. The students are young poets from the North Shore and from Otahuhu, who recently took part in poetry workshops as part of the Million Poems for Matariki community poetry project.

Door prizes provided by Auckland University Press. Wine provided by Glengarry.
This event has been organised by the Auckland City Library and the Michael King Writers' Centre as part of The Poetry Project taking place in 2010.
Poets have been visiting Auckland schools to lead poetry writing workshops and a set of resource kits for community poetry projects are being developed.
The most recent workshops have been around the theme of Matariki, the Maori New Year, but there will be school workshops on  other themes later this year. The project has been funded by a grant from the North Shore City Council ARST fund for the arts.
Posted by Beattie's Book Blog at 1:54 pm