A fun drawing game involving a random shape being transformed into something recognisable, The Shape Game has now been taken on by over 45 writers, artists, illustrators and celebrities who have let their imaginations loose on an original shape drawn by Children’s Laureate Anthony Browne.

Members of the public are able to bid for the original artwork from the project at an online auction which started on Monday 26th July. For further information see www.childrenslaureate.org.uk. The transformed shapes have also been published by Walker Books in an accompanying book, Play the Shape Game, intended to encourage children to use their imaginations. The book, which will is published in paperback at £5.99, also features brand new shapes created by the contributors which readers can then customise for themselves. 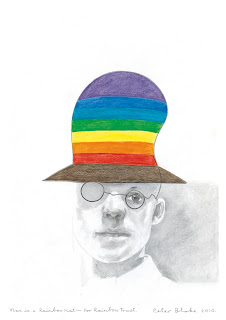 Hats proved a common route for many of the contributors involved, with Jo Brand, Axel Scheffler, Jacqueline Wilson, Andrew Motion, Tara Palmer-Tomkinson and Sir Peter Blake ( left) amongst those transforming the shape into headwear. Animals were also a popular choice: Harry Hill opting to customise the shape into a whale, Quentin Blake adapting it into a bird (below, left) and Emma Thompson using her artwork as a way to declare that she is “obsessed with pigs”. Other creations inspired by the animal kingdom include those by Greg Wise (who drew a rhino), Michael Morpurgo (elephant), Michael Foreman (hippo - left) Catherine Rayner (pig), Linford Christie (bird), Emily Gravett (owl), Shirley Hughes (cat) and Ken Livingstone (shark).

Other creations include a desert island by Booker-Prize winning author Ian McEwan, a person pondering the question: “Why Me?” by philosopher Alain de Botton, and comedian Leigh Francis’s take on 1980s high-school hero, Teen Wolf.

Quentin Blake, the first contributor to sign-up to the project, said:
“I jumped at the chance to get involved; not only was it huge fun thinking about how I’d like to customise Anthony’s shape, but encouraging creativity is something I feel very strongly about. I hope the auction and book go on to raise lots of money for Rainbow Trust, which does such important work to support families at a time of great need.”

Anthony Browne said:  “Although on one level it’s just a game, I believe that it encapsulates the act of creation… everything comes from something else, inspiration is everywhere. I am thrilled that so many big names have joined in to play The Shape Game and I’ve had enormous pleasure looking through their artworks – it’s fascinating to get a glimpse inside the minds of celebrities! Hopefully they will capture the public’s imagination too so that we can raise a good amount for Rainbow Trust.”

Bestselling author Philip Pullman said of his contribution :
“I was enthusiastic about the idea from the start, because I seize on any excuse to get my pencils out, and this idea was so intriguing. I did have to let my mind go free over Anthony’s shape – there’s no point in thinking hard about it, because the exercise really involves thinking very loosely. But as I did, the landscape seemed to form itself around the shape. I loved doing it - huge fun”.

Both the auction and the book were launched this morning (Monday 26th) at a special event at Waterstone’s Piccadilly (London), Europe’s largest bookstore. All funds raised from the auction and all profits from the sales of the book will be donated to Rainbow Trust, a charity which provides vital support to families who have a child with a life threatening or terminal illness. 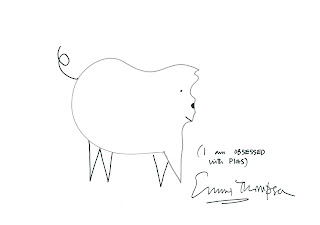 Posted by Beattie's Book Blog at 7:39 am