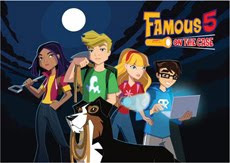 Enid Blyton lingo gets an update

Enid Blyton's Famous Five series is being updated with changes to the dialogue and contemporary covers aimed at encouraging a new generation of young readers.

Publisher Hodder Children's Books puts annual sales of its Famous Five editions at over half a million. However, research by brand owner Chorion found that they could be higher; many parents are put off introducing Blyton to their children because of its dated language.

A statement from Chorion read:"When we tested the different texts with children, it turned out that their parents were right, pretty much across the board in all markets . . . The magic of Blyton is the ability she has to transport readers into another world and pull them along through page-turning adventure. For a lot of today's readers, that just wasn't happening because of a few outdated words and phrases, so we feel it's absolutely right to do this."

Hodder said that the changes will affect the dialogue in the stories with the narrative left "largely untouched". Publishing director Anne McNeil said: "Very subtle changes have been made to remove the barriers that stood between readers and the story." In the original text, for example, Dick says: "She must be jolly lonely all by herself" which has been updated to read: "She must get lonely all by herself." "Mother and father" become "mum and dad" and "school tunic" becomes ‘uniform'."

McNeil said that the changes were not intended to make the Famous Five books "modern" but to place them in a "timeless" age. She said: "We have not introduced any slang or colloquial language that would place the characters in today's world." The covers have also been updated to show realistic children engaged in activities.

It is not the first time that Blyton's stories have been updated with a number of outdated and sometimes offensive characters and expressions periodically removed, despite opposition from many Blyton fans. Hodder also publishes the Secret Seven and Naughtiest Girl series and says it has "no plans" at present to make the same changes to these.

The launch of the edited series will be marked with an online treasure hunt and a redesign of the website, www.famousfivebooks.com. The first 10 books will be published next month and two a month thereafter.
Posted by Beattie's Book Blog at 7:38 am