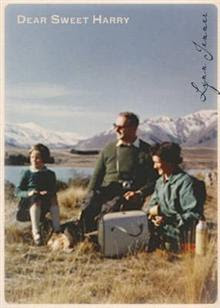 Dear Sweet Harry won a prestigious prize before it was ever published – in 2008, Jenner’s manuscript received the Adam Foundation Prize in Creative Writing, awarded while she studying for her MA in Creative Writing at Victoria University of Wellington’s International Institute of Modern Letters.

Lynn Jenner’s first book is the autobiography of an obsession. Global, offbeat, remarkable, Dear Sweet Harry is unlike anything else in New Zealand literature. An assemblage of “factions” and ephemera, poems and scraps, it links the author's own family history with that of two famous deceivers, Harry Houdini and Mata Hari.

Jenner says that while no biological relation to Harry Houdini, like millions of others, she relates to Houdini, who appeared in her life with no invitation or apparent prior connection, on 1 October 2006. She began reading about him, wondering how he popped into her mind.

“For a man who placed such a store by secrets, his diaries and interviews spoke openly and frankly of the things that mattered to him, as clearly as though he were in the room. He was desperate to be accepted, to make money, to be seen as respectable – all the classic immigrant preoccupations, and he was willing to suffer to get these things.”

As well as being the story of the author’s obsession with Houdini, Dear Sweet Harry is the story the author’s grandfather, another Harry, the son of Jewish immigrants from Europe, who had settled in Wellington.
“Like Houdini, ‘our Harry’ was keen to serve his country in World War One, but unlike Houdini our Harry was sent to the Western Front.”
“Try and come back on the return boat,” his mother writes to him, “we are and will be anxious to see you, and write often, that is the only consolation we have while you are away.”

“You could say this tiny piece of a story was the germ of Dear Sweet Harry. Or it could have been finding the letter from Harry’s mother. Or the appearance of Harry Houdini on a night in 2006.”

Before Lynn Jenner took up writing at the age of 49, she practiced as a psychologist and counsellor for 25 years. She has two sets of academic qualifications –an MA in Creative Writing from the IIML at Victoria University of Wellington, New Zealand, and an MEd, Dip Ed Psych and Dip Teaching. She is currently working towards her PhD at the Victoria University of Wellington. Her poetry has been published widely in journals. Lynn lives with her partner, Tony, on the Kapiti Coast, north of Wellington.

Ø    Dear Sweet Harry will be launched on National Poetry Day, Friday 30 July, by poet and scholar Chris Price at Unity Books, 57 Willis Street, Wellington. The launch is open to the public.

Ø    Dear Sweet Harry will also be celebrated at a public event on the Kapiti Coast alongside three other books by Kapiti authors: 4pm, Saturday 14 August, Valhalla Café, Raumati South.
Posted by Beattie's Book Blog at 10:34 am