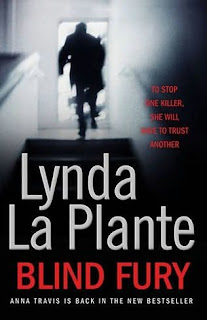 Lynda La Plante, and yes that is her real name by the way even if it does sound like a pseudonym,  has had three careers really, although all in the entertainment business.
First off she was an actress, mainly on television appearing in such hits from the 70’s & 80’s as Z-Cars, The Sweeney, and Bergerac.  Then she moved on to script writing with her first big hit being Widows back in the mid-80’s but she really became a major player with her script for Prime Suspect which has now run to seven series and of course stars Helen Mirren as DCI Jane Tennison. In 1993 she won an Edgar Award from the Mystery Writers of America for her work on the series. She is an honorary fellow of the British Film Institute and was awarded the CBE in 2008.
These days though she is best-known as a best-selling author of thriller/ crime fiction novels most recently featuring Detective Inspector Ann Travis of which Blind Fury is the latest. Interestingly almost all her titles have but two words – Cold Shoulder, Cold Blood, Cold Heart, Royal Flush, Silent Scream, Deadly Intent, Clean Cut and now Blind Fury.
This one opens with the naked body of a young woman being discovered on the side of the M1 motorway just outside London. She has been raped and strangled. Detective Inspector Travis is brought on to the team working on the case and before long it is realised that two previously unsolved murders have the same hallmarks as this one and the case quickly becomes a triple murder investigation.

This is pure crime fiction with the police, initially being unable to identify the victims, having no witnesses and thus working painstakingly over and over again through the available evidence. Quite early in the story a convicted murderer, known to Anna as she was part of the team that arrested him, makes contact with her from prison claiming to be able to help. She loathes this man but is forced to make personal visits to him in a prison outside Leeds to see if he really can help.

As the case develops the police realise they are dealing with a serial killer whose deviousness has enabled him to commit horrific murders of young women yet remain undetected for years all near a dimly lit motorway service station catering for long-distance truck drivers.

As with all good detective yarns there is also an underlying personal story involving Travis with both present and former love interests as well as her ambition to be promoted to Detective Chief Inspector.
A good read, running to 500 pages, totally distracting and I found myself unable to put it down. In fact I had almost finished it earlier in the week and was reading it on a flight from Christchurch to Auckland. The next thing I knew the plane had landed at Auckland and the whole hour or so had disappeared with me totally engrossed and unaware of anything or anyone else around me.

I had a bit of drama with reviewing this title as I left my review copy unread in the US a week or so ago when I was up there visiting family in NY. The publishers couldn’t get a replacement to me quickly enough so last Friday I bought another copy at Whitcoulls in Queen Street. Auckland while in the city for a meeting and as a result I guess I am going to end up with three copies! Interestingly too although the publisher’s recommended retail price is $39.00 the Whitcoulls price was $42.99 !!  RRP’s are of course just that, recommendations, and retailers can charge what they like. While both Borders and Whitcoulls frequently sell above the rrp, I haven’t found this to be the case in other NZ bookstores. One observes in both the US and the UK that more often than not books, especially new titles, are sold below the rrp. So if you go out to buy this title make sure you pay no more than $39 !
Posted by Beattie's Book Blog at 12:54 pm