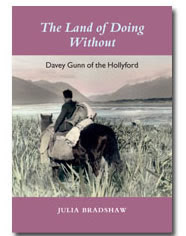 THE LAND OF DOING WITHOUT
Davey Gunn of the Hollyford

This is the story of the remarkable Davey Gunn who against the almost insuperable odds of difficult country, isolation, the Depression, the depredations of a burgeoning deer population and the constant threat of losing his short-term leases, wrestled to make a living from his largely wild cattle.
He was also keen to open up and share the land he loved, and in the mid-1930s pioneered guided walking and riding trips in the Hollyford and Pyke Valleys. Hollyford Camp, also known to this day as Gunns Camp, is testament to the efforts of this true No. 8 wire man, who did more than any other individual to alert travellers throughout New Zealand and the world to the unparalleled beauty of this part of Fiordland.
The Land of Doing Without brings to life the memories of many of Davey’s contemporaries, and explores the man behind the legend: his quirks, his fortitude and his legacy.
Author JULIA BRADSHAW has been researching and writing local history for 16 years. A summer job as a guide on the Hollyford Track in Fiordland ignited Julia’s research interests, which include the social history of Fiordland, the West Coast, the South Island’s goldfields and early Chinese immigrants to New Zealand.
She lives on the West Coast, near Kokatahi, with her partner, Eddie Newman, who shares her passion for exploring New Zealand’s remote places.
Julia has written three other books: Miners in the Clouds: A hundred years of scheelite mining at Glenorchy (Lakes District Museum, 1997), The Far Downers: The people and history of Haast and Jackson Bay (Otago University Press, 2001), and Arrowtown History and Walks (Otago University Press, 2001).
Posted by Beattie's Book Blog at 5:41 pm

Hey Bookman Beattie
Aha, a book I have read before you! You will love The Secret of Lost things. It is full of wonderful characters, rich language (had to get the dictionary out quite a few times, which is always fun!) and cool literary references (but not in a pretentious way). Helps if you've read Moby Dick! The cover makes it look a bit like chick lit but it is so not.In terms of reading experiences it reminded me of The Thirteenth Tale by Diane Setterfield.
Lee