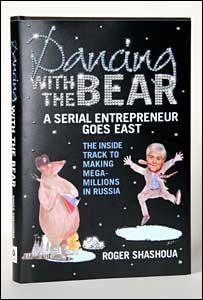 £3m BOOK TARGETS RUSSIAN TYCOONS
This story from the BBC.
Author Roger Shashoua made a fortune in post-Soviet Russia
Russian tycoons are the target readers for a diamond-encrusted book with an estimated value of £3m.
British entrepreneur Roger Shashoua is offering a made-to-order edition of his new book Dancing With The Bear.
The cover of each of the special "oligarch" copies, said to be the most expensive book in the world, features more than 600 flawless diamonds.
The book is an account of how the author made £100m through business in post-Soviet Russia.
Mr Shashoua expects interest from wealthy Russian ex-pats based in the UK.
He said: "There is so much money floating around in Russia that it seemed entirely logical to produce a book designed for the Russian market.
"I am just happy that conspicuous displays of consumption can now be associated with writing, rather than fashion accessories.
"I can only hope that oligarchs will read the book, rather than just keeping it locked away."
For the special edition, the cover has been switched from the standard white to black to show up the diamonds.
Mr Shashoua co-founded exhibitions business ITE, which now trades on the London Stock Exchange with a market value of more than £500m.
Russia boasts 53 billionaires including Chelsea Football Club owner Roman Abramovich, mainly in oil, steel, mining and metals, according to Forbes magazine.
Posted by Beattie's Book Blog at 7:37 pm