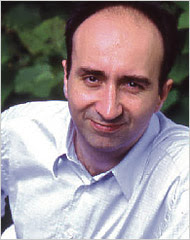 THE BOSTON GLOBE ON THE NEW YORKER'S NEW LITERARY CRITIC.

THE BLOOD PRESSURE of some of America's leading novelists no doubt just shot up: James Wood, The New Republic's famously stringent book critic -- scourge of John Updike, Toni Morrison, Thomas Pynchon, Don DeLillo -- has jumped to The New Yorker, giving him a much wider audience for his coolly incendiary literary sermons.
For a hiring that followed a familiar pattern -- small, good magazine to big, good magazine -- Wood's move caused an extraordinary stir in literary circles. At The New Republic, his immensely learned, barbed essays, utterly unbowed by conventional wisdom, earned him an ardent following and the ire of novelists who failed to meet his standards.
Wood is controversial partly for his unusually clear (his detractors say crabbed) ideas about what a great novel is -- or, rather, isn't. He is especially set against "hysterical realism," his coinage for books that attempt to convey the raucousness of contemporary life through outlandish proliferating plots, allegory, bizarre coincidence, and high irony. In other words: Pynchon, Salman Rushdie, much of David Foster Wallace, the first two Zadie Smith books, and half of "The Corrections," by Jonathan Franzen.
He is not indirect in his criticisms. The Nobel Laureate Morrison's novel "Paradise," Wood pronounced a few years back, "is a novel babyishly cradled in magic. It is sentimental, evasive, and cloudy." DeLillo's "Underworld," he has written, "proves, once and for all, or so I must hope, the incompatibility of the political paranoid vision with great fiction."
Even his detractors concede that such takedowns are the fruits of a love for the novel -- of a certain sort. But what does it mean that the most storied magazine in American history has aligned itself with a critic who essentially rejects the premises of a broad swath of contemporary American fiction?

For the full story use this link.
Posted by Beattie's Book Blog at 1:53 pm