Zen Under Fire: A New Zealand Woman's Story of Love & War in Afghanistan 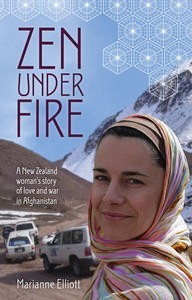 I am about to be left in charge of the office. I'm not sure I am ready for the responsibility, so I double-check with my boss.
He reassures me. 'You'll be fine, Marianne. As long as no one kills Amanullah Khan, you'll be fine.'
By midday, Amanullah Khan is dead.


In 2006 Marianne Elliott, a human rights lawyer from New Zealand, was stationed with the UN in Herat. Several months into her new role an important tribal leader is assassinated while she is in charge of the local UN office. She must try to defuse the situation before it leads to widespread bloodshed. And this is just the beginning of her story in Afghanistan.
Zen Under Fire is a vivid account of Marianne's experience living and working in the world's most notorious battlefield. As well as sharing the incredible details of her UN role, Marianne tells the very personal story of the shattering effect that the high-stress environment had on her and her relationships, and asks what is really means to go good in a country that is under seige from within.

Rachael King has been enthusing about this title on her Facebook page (she must have received an advance copy as it was only published Friday) and now that I have had a chance to read it I must say I totally agree with her comments and also with the publisher's description - This is an honest, moving and at times terrifying true story of a woman's time peacekeeping in one of the most dangerous places on earth.

Author -  Marianne Elliott - more about the author on her website.
Publisher - Penguin Books
RRP - $34.99
Posted by Beattie's Book Blog at 6:26 am