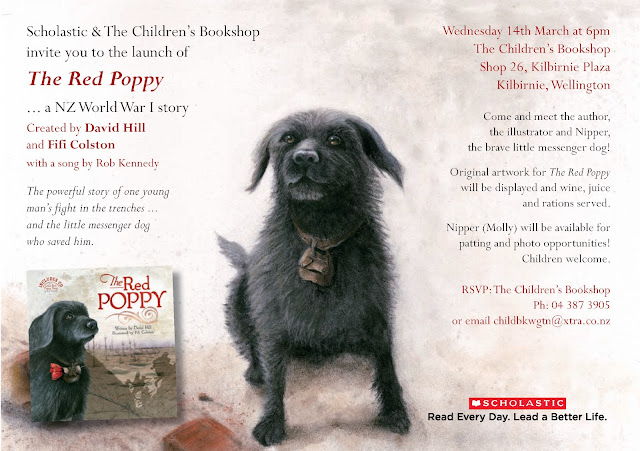 Scholastic  & The Children’s Bookshop
invite you to the launch of
The Red Poppy
... a NZ soldier in World War 1
Written by David Hill & illustrated by Fifi Colston, with song by Rob Kennedy
The powerful story of one young man’s fight in the trenches ...
and the little messenger dog who saved him.
Wednesday 14th March at 6pm
The Children’s Bookshop
Shop 26, Kilbirnie Plaza
Kilbirnie, Wellington
Come and meet the author, the illustrator and Nipper, the brave little messenger dog!
Original artwork for The Red Poppy will be displayed, and wine, juice and rations served.
Nipper (Molly) will be available for patting and photo opportunities!
Children welcome.
RSVP: The Children’s Bookshop Ph: 04 387 3905 or email childbkwgtn@xtra.co.nz 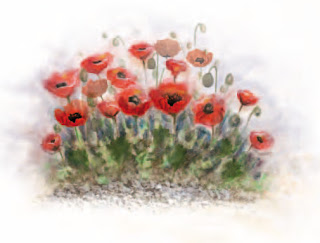 Footnote:
When the Publishing department at Scholastic received a copy of a CD of the haunting, lyrical song The Red Poppy from Canadian musician/teacher Rob Kennedy, they just knew they had to do something with it and approached David Hill to see if he’d be interested in writing a war story for a picture book – his first.

David was very interested in the subject matter and came up with a sensitively written, poignant story that shows the similarities between soldiers on both sides. Scholastic then approached Fifi Colston to do the artwork. “All along, we knew we wanted this to be an absolutely beautiful production – a really special book,” says Scholastic’s Senior Editor, Penny Scown. Fifi produced some stunning and evocative illustrations, which meld seamlessly with the text to portray a grim story with a positive outcome. She then worked with designer Penny Newman and Scholastic to get just the right cover and feel for the book, which is available in hardback with gorgeous endpapers and which includes the CD of the song The Red Poppy – the inspiration for the whole project.
An utterly gorgeously illustrated, superbly designed book, that tells a moving story, and includes  the haunting song on the CD that started it all. This book should be in every New Zealand home and in multiple copies in public and school libraries. Watch for it next year when book prize time comes around. It is a winner in every way.