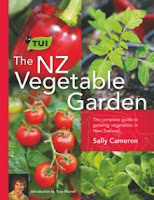 Penguin is recalling and destroying all copies of a gardening book after it was alleged that passages were plagiarised from a bestselling English horticulturist.
Retail outlets carrying Sally Cameron's The Tui NZ Vegetable Garden are being asked to return stock immediately to be destroyed. Warehoused copies will share a similar fate.
Waikato Times gardening writer Abbie Jury chanced upon numerous, clear similarities between the book's content and David Hessayon's The New Vegetable and Herb Expert.
Dr Hessayon penned his book some 10 years before Cameron produced hers.
In 2010 Jury outed plagiarism in Cameron's second book in the gardening series, The New Zealand Fruit Garden, which was subsequently recalled and reworked.
"When I lifted the lid on that first one they should have been having a very close look at the other one, but they didn't, apparently," Jury said.
"Penguin are taking no responsibility and hanging the author out to dry, again. I almost feel sorry for her."
Penguin Group (NZ) released a statement to the Waikato Times yesterday.
General manager of publishing Debra Millar said: "Our authors are contractually obligated to ensure that all material is original and free of copyright.
"The book was subject to rigorous editing processes which unfortunately failed to detect any issues with the material that was supplied to us by the author. `Penguin deeply regrets this situation which falls short of our high publishing standards."'
Over 25,000 copies have been published in two editions – one in 2009, and another in 2011.
Penguin was also scrutinised in 2009 after The Trowenna Sea by Witi Ihimaera was found to contain unacknowledged copy that appeared to come from other authors' work.
The publishers agreed to refund customers who had bought the book and Mr Ihimaera bought back the remaining unsold stock.

I think it is rather unfair to bag Penguin for failing to know that their author had lifted material from an English book published 10 years earlier. Even if there were problems with her second book, what were they supposed to do? - Apart from asking her to confirm there were no problems with the material in the first book. Which I assume they did. One can't expect them to examine every book on the subject ever published just to see if there had been any plagiarism. The fault here clearly lies with the author. I assume she signed a contract confirming the work was her own. If I were them I would sue her for any loss of profits on books that had to be destroyed or recalled...