With the greatly increased interest by young people in Anzac Day in recent years there has been a noticeable upturn in book publishing for this market.
This year for example Scholastic are releasing four books with war themes: 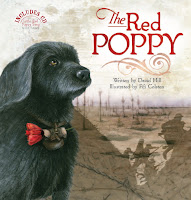 Five minutes …
Two minutes …
One minute …
Young soldier Jim McLeod waits in the trenches of World War I for the order to attack the enemy. With him are his friends, and Nipper, the messenger dog. When they charge across no-man’s-land, Jim is shot … and finds himself face to face with an enemy soldier.
Invitation to attend book launch.
When Empire Calls by Ken Catran
It’s early days in the Boer War and the small farming community of Huia is gripped by patriotic fervour.

Men, young and old, are eager to join up and head overseas to fight the ‘evil scoundrel folk in Africa who opposed the British Empire and had to be taught a lesson’.
When his two elder brothers join up, James is left to help his father run the family farm. He also helps old Croaky Fred in the local village store, a bad-tempered old codger who has nothing good to say about war.
Through his brother Edward’s letters, James learns about some of the horrors of war … but will both his brothers come home?

MNZS Here Come The Marines  by Lorraine Orman
It is 1943 and Lillian is brassed off. Until now she was like any normal city girl – at least, as normal as you can be when there’s a terrible war on and your father is away fighting. Then a spot is found on Lillian’s lung – tuberculosis.
Before she knows it, Lillian is packed off to recover on her grandparents’ farm in Whangateau, near Warkworth. With no friends, and only her preening older sister Joyce and their grandparents for company (and Grandad’s a miserable blighter at the best of times), Lillian feels like a duck out of water. That is, until the day a US Marine Division moves in down the road. That afternoon, four Marines turn up on their doorstep wanting to buy milk.
Life in Whangateau is about to get a LOT more interesting ... 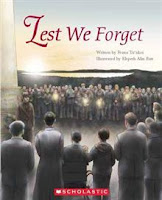 Lest We Forget by Feana Tu'akoi, illustrations by Elspeth Alix Batt
Tyson doesn't understand why Mum and Poppa would want to go to the Anzac Day Dawn Parade.
But then he hears stories about soldiers in his family and decides perhaps he should go to the Dawn Parade after all.