If you’re an independent bookseller in Australia at the moment, you probably feel better than anyone else in the industry does. Business is up, as a result of less competition following the collapse of Borders and Angus & Robertson. Book prices are down, as a result of the high Australian dollar and publishers capitulating to offshore competition and the weak economy, so your customers are getting much better value for money. There are even some signs that customers are rediscovering the special pleasures and benefits that only a physical bookshop can provide.
On the other hand, you’re probably worried that e-book sales are rising rapidly, and that you’re going to miss out on most of this market. You’re still hurting from offshore online booksellers who don’t have to pay GST or customs duties, or whose subsidised postal costs are unavailable to you. You also have to work harder than ever before, because lower average book prices mean you have to sell more books just to stand still. And you might also be worried about the growing rumours that Amazon is planning to set up in this country; if that comes to pass anytime soon, it will represent an existential threat to your business.
If you’re a book-buyer working for one of the big chains or department stores, you’re probably dreaming of a promotion to the meat products section. Or else you’ve got plans to treat books like
salami.
If you’re a literary agent, you’re probably worried about where your next dollar is going to come from. Advances from publishers are coming down across the board (especially from the big houses, which is where most of your income comes from), so there’s less money for your authors and your business to survive on until each book is published. You’re anxious about e-book royalty-rates, because you have to license them without knowing if they’re reasonable or not. And, given the overseas trend for the acquisition of world rights, you’re finding it harder to justify your existence as a local agent. It’s almost back-to-the-future time, when it makes more sense for a commercial Australian author to be published in London or New York than Melbourne or Sydney.
If you’re an author, your prospects depend on the areas you work in. Paradoxically, if your work is marketable, you have a good chance of getting a local publishing deal — because, in publishers’ eyes, there’s now a premium on local books that don’t or won’t suffer from offshore competition. But, for authors of mid-list books (that is, books with fair-to-middling commercial prospects), advances will be lower than they’ve been, and will trend lower. And authors with a poor or faltering track record of sales as reported by Bookscan will find it harder to find publishers prepared to back them.
If you’re a book printer, you’re struggling with unprecedented simultaneous problems. Print runs are down, reprints are down (and smaller), and value-adding cover embellishments are down. You can’t raise your prices, and publishers are demanding impossible levels of service. You’ve cut shifts, and you’ve retrenched staff. The one area that’s booming is digital — print-on-demand titles and short-run digital reprints — but it’s cannibalising your conventional business. In essence, you’re an Australian manufacturer facing global headwinds. How do you make a profit in this environment?
If you’re a book publisher, you’ve got the blues real bad. Turnover is down dramatically; in fact, it’s fallen over a cliff. The value of bookshop sales, as measured by Bookscan, dropped by 17.5% in December last year, compared with the same period in 2010. This already-alarming trend was being maintained earlier this year, but it has just started to accelerate: in the second week of February 2012, the value of book-trade sales was 22 per cent lower than for the same week a year before; in the third week, the value was down 29 per cent. The first three weeks combined were down by 21.5 per cent. Publishers are hoping that this is the tail-end effect of the Borders and Angus & Robertson collapse. But what if it’s not?
Read Henry's full essay at his blog. 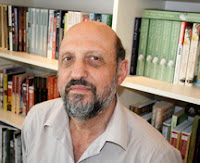 HENRY ROSENBLOOM is the founder and publisher of Scribe. A son of Holocaust survivors, he was born in Paris, France, in 1947, was educated at the University of Melbourne, where he became the first full-time editor of the student newspaper, Farrago, and later worked in the Whitlam Labor government for Dr Moss Cass. The author of Politics and the Media (1976), he has been a book printer, freelance journalist, book reviewer, and occasional newspaper op-ed and feature writer. In 2010 he was presented with a George Robertson award for service to the publishing industry. He is a member of the board of the Melbourne Writers Festival.
Posted by Beattie's Book Blog at 4:31 pm