Murdoch's Sun on Sunday: less of a newspaper, more of a magazine


In trying to draw a line under the past, the seventh-day Sun seemed bland and soft focus, but sales will no doubt shine 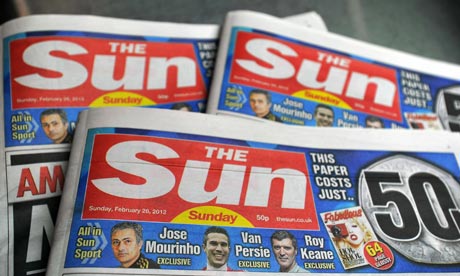 The Sun on Sunday: 'self-consciously soft focus'. Photograph: John Stillwell/AFP/Getty Images
The Sun on Sunday was the Sun – but not the Sun as we know it. In order to avoid giving offence and therefore hint at being a reincarnation of its deceased ugly sister, the News of the World, it appeared unusually bland.
The splash and the four inside pages devoted to actor Amanda Holden's problems in giving birth read like a feature from Hello! magazine.Elsewhere, the series of first-person stories – such as the dinner lady's daughter who boasted of being spoiled, a Liverpool footballer's grandmother telling of her love for her "little black boy", and a war widow speaking of her grief – were redolent of the formula employed by another successful magazine, Take A Break.
It looked like the daily Sun, with the same typeface of course, and enough familiar aspects to maintain a sense continuity: Bizarre, Dear Deidre, and the obligatory Page 3 totty (though with nipples covered).
Technically, it was excellent. That's a tribute to the subeditors and, presumably, the editor, Dominic Mohan.
But overall, this was less of a paper and more of a magazine.
Not only were there no investigations, there were few revelations of any kind, and no hint of controversies or even surprises. (Mind you, the column by Dr John Sentamu, the Archbishop of York, probably raised some eyebrows among readers and his fellow Church of England clerics.)
Otherwise, the material was deliberately, even self-consciously, soft focus. The columns by Katie Price (aka Jordan) and Nancy Dell'Olio were predictable and uninteresting. Along with page 3, they hardly justified the claim made in the pre-launch hype that the new publication would be especially female-friendly. There was bags of sport, some 45 pages out of the 120-page total. That is clearly going to be a major selling point. Every league match was covered.
Though many buyers may not have read it, the leading article was hugely revealing. It was open about the Sun's travails, and sought to draw a line under the past. That, of course, may be impossible because there could still be more arrests. For the moment, though, Rupert Murdoch clearly wants the readers to believe he has dealt with, or is dealing with, the problem.

So the leader spoke of the paper having been "a tremendous force for good" and said: "Over two generations the Sun has forged a bond of trust with you, our readers."
It pledged to "hold our journalists to the standards we expect of them … You will be able to trust our journalists to abide by the values of decency as they gather news".
My hunch is that the seventh-day Sun will return shining sales figures after a weighty spend on promotion and marketing. It didn't have a price advantage, because its rivals cut their cover prices, too.
When was it last possible to buy four Sunday papers for £2?
In price wars, the gambler with the deepest pockets usually wins. And there are no prizes for guessing who that is.
Read the view from the other side at The New York Times.
Posted by Beattie's Book Blog at 4:07 pm