The Happy Life: The Search for Contentment in the Modern World, by David Malouf, Chatto & Windus, RRP£10, 106 pages
It’s Christmas, the second most popular time for husbands and wives to start planning divorce proceedings. (The most popular is the summer family holiday.) ’Tis, we’re told, the season to be jolly, though with its short days and long, dark nights of the soul, it’s more likely the season we ask ourselves how jolly we really are. And no, that bottle of 12-year-old single malt you’ve gift-wrapped for yourself is not the solution.
So what is? That’s the question the novelist David Malouf has set himself in this limber yet learned essay. Why, he wants to know, has the vanquishing of most of the great enemies of happiness – hunger, disease, early death, poverty – failed to usher in an age of widespread contentment? His answer will not please Britain’s prime minister, who having looked at the predictions for future growth has let it be known that he thinks it’s “time we admitted that there’s more to life than money” and “focused not just on GDP but on GWB – general well-being”. 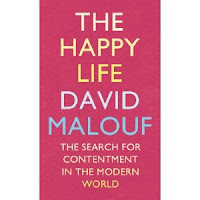 Not that Malouf is some mad materialist who thinks money is all that counts. Rather, he believes that politicians do more harm than good when they start concerning themselves with the cheeriness or otherwise of prospective voters. After acknowledging the power of the phrase-making in the US Declaration of Independence, he goes on to analyse Jefferson’s most famous clause – the one about “life, liberty and the pursuit of happiness” – and finds it, if not wanting, then at least a little wayward.
Full review at the FT Weekend.

Posted by Beattie's Book Blog at 2:03 am