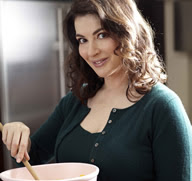 Random House has released two more Nigella Lawson cookbooks as e-books today (20th December), launching digital versions of both Nigella Bites and Feast.
Developed by Vintage Digital, both feature interactive navigational features to simplify browsing for recipes, which will be categorised by food groups. The e-editions will be compatible with all devices, with price varying between retailers.
Nigella Bites was first published in hardback by Chatto & Windus in 2001, and Feast in 2004.
Kitchen and Nigella Express were both released as e-books in June.
Lawson's series "Nigella Christmas" will be repeated on BBC2 across 20th-22nd December.
Posted by Beattie's Book Blog at 6:08 am