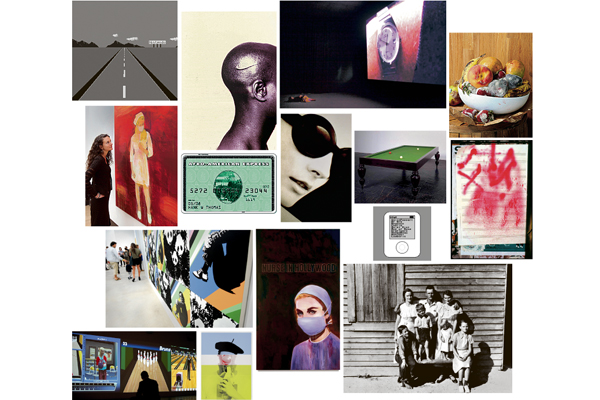 Theft or fair use? A collection of pieces by artists who appropriate images created by others. A key to the works above is available here.
Richard Prince's "Inquisition," which uses the Rastafarian pictures taken by the French photographer Patrick Cariou.
In March a federal district court judge in Manhattan ruled that Mr. Prince — whose career was built on appropriating imagery created by others — broke the law by taking photographs from a book about Rastafarians and using them without permission to create the collages and a series of paintings based on them, which quickly sold for serious money even by today’s gilded art-world standards: almost $2.5 million for one of the works. (“Wow — yeah,” Mr. Prince said when a lawyer asked him under oath in the district court case if that figure was correct.)
The decision, by Judge Deborah A. Batts, set off alarm bells throughout Chelsea and in museums across America that show contemporary art. At the heart of the case, which Mr. Prince is now appealing, is the principle called fair use, a kind of door in the bulwark of copyright protections. It gives artists (or anyone for that matter) the ability to use someone else’s material for certain purposes, especially if the result transforms the thing used — or as Judge Pierre N. Leval described it in an influential 1990 law review article, if the new thing “adds value to the original” so that society as a whole is culturally enriched by it. In the most famous test of the principle, the Supreme Court in 1994 found a fair use by the group 2 Live Crew in its sampling of parts of Roy Orbison’s “Oh Pretty Woman” for the sake of one form of added value, parody.
Full piece at The New York Times.
Posted by Beattie's Book Blog at 2:55 am