Author says more copies of her book have been downloaded illegally than sold, and claims politicians too scared to act - Giles Tremlett in Madrid - guardian.co.uk, Tuesday 20 December 2011 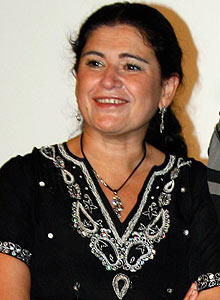 Lucía Etxebarria won the Planeta prize in 2004. Photograph: Europa Press/Getty Images An award-winning Spanish novelist claims that the illegal downloading of ebooks has forced her to give up writing and start looking for a new job.
"Given that I have today discovered that more illegal copies of my book have been downloaded than I have sold, I am announcing officially that I will not publish another book for a long time," Lucía Etxebarria announced on her Facebook page.
Etxebarria told the Guardian that Spanish authors faced a difficult future as online piracy spreads from music and film to literature.
She pointed to Spain's position at the top of the world rankings for per capita illegal downloads. "We come after China and Russia in the total number of illegal downloads but, obviously, there are a lot more of them so we win on a per capita measure," she said.
"People are making millions out of online piracy by setting up in places like Belize, which is where the money goes," Etxebarria said. "They are a powerful lobby and our government doesn't dare legislate."
The outgoing socialist government of the prime minister, José Luis Rodríguez Zapatero, ditched a proposed anti-piracy law this month. "They were too scared," said Etxebarria.
She said she was not convinced that the new conservative People's party government of Mariano Rajoy, who became prime minister on Tuesday, would be any braver.
Etxebarria, who has won several of Spain's best-known literary prizes, said she could no longer justify devoting three years of her working life to producing a book.
Her latest novel, The Contents of Silence, was published in October and although previous books have been bestsellers, this one is ranked low down the sales list on Amazon's Spanish site.
It is not available as a legal ebook but can be downloaded in pdf format from numerous websites. The print edition costs more than €20.
"We decided against publishing it as an ebook because that is easy to pirate. It would have been like throwing it straight to the lions," Etxebarria said
Full story at The Guardian
Posted by Beattie's Book Blog at 6:00 am