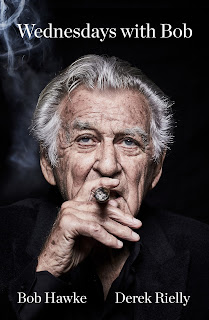 
On Wednesdays this past year the longest serving Labour prime minister – he won four elections between 1983 and 1991 and maintained a 75% approval rating with the Australian people – has welcomed writer Derek Rielly into his home for animated conversation and indecently fine cigars. On a sun-soaked balcony the irreverent young writer and the charismatic old master talk life, death, love, sex, religion, politics, sport, fatherhood, marriage and everything in between. The result is an extraordinary and unique portrait of a remarkable Australian eloquently, emotionally, and humorously reflecting on his past, present, and future as never before.


Interspersing these chats with Hawke are Rielly's interviews with Bob's contemporaries - former nemesis John Howard, Labor allies Gareth Evans and Kim Beazley, lover and wife Blanche D'Alpuget, good mates John Singleton and Col Cunningham, diplomat Richard Woolcott, economist Ross Garnaut and more - all painting Hawke's enigma from the outside and paying tribute to a man who strode the world stage with aplomb and won the hearts of millions in Australia and worldwide.


AUTHOR INFORMATION
Derek Rielly is a journalist born in Perth and based in Sydney. He is the son of a pro wrestler father and diplomat mother and the co-founder of Stab magazine. Derek worked as a blackjack dealer and bartender before becoming a full-time writer. Wednesdays with Bob is his first book.


Bob Hawke is the 23rd prime minister of Australia. Born in Bordertown, SA, he joined the Labor Party in 1947 and became leader in 1983 after a decade as ACTU president. As Prime Minister 1983-91, Hawke won four elections, becoming the longest serving Labor PM in history. At 87, Bob is Australia's oldest living prime minister – and still its most popular.
Posted by Beattie's Book Blog at 12:19 pm