Which literary novels should daredevil film directors adapt next? 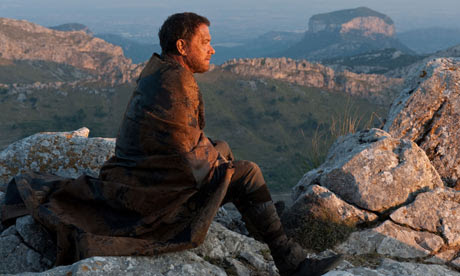 Tom Hanks as a noble tribesman, in one of the six stories in Cloud Atlas. Photograph: Moviestore/Rex Features

When the Cannes film festival starts next week, William Faulkner's As I Lay Dying, adapted and directed by James Franco, will be in the lineup. The Spider-Man star is known for mixing bookish projects with acting in blockbusters, but has nevertheless raised eyebrows by selecting a novel with 15 narrators that tells the seemingly uncinegenic story of a southern matriarch's death and burial.

This month will also see Paul Thomas Anderson begin to shoot his version of Thomas Pynchon's Inherent Vice, the first of Pynchon's dauntingly complex works to be filmed; and Steven Soderbergh recently announced plans for a 12-hour TV dramatisation of John Barth's The Sot-Weed Factor ("If it works, it'll be super-cool. And if it doesn't, you won't be able to watch 10 minutes of it"), a rambling 750-page novel with an ill-advised title about an English poet in 17th-century Maryland.
Something is clearly changing, at least for adventurous auteurs, raising the question of whether any books still remain off-limits.
More
Posted by Beattie's Book Blog at 8:18 pm