Photos below were taken at the event and show top to bottom:
Debra Millar- General Manager – Publishing, Penguin Group (NZ)
Staff & students from 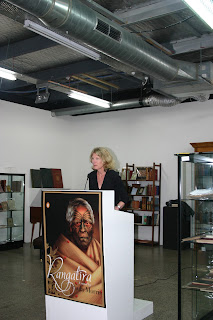 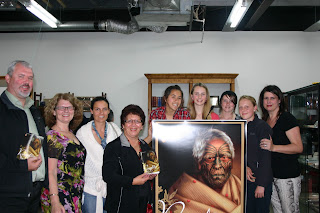 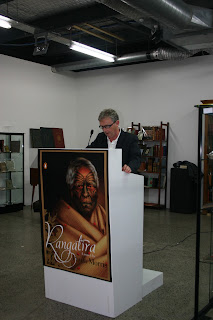 Debra Millar said "Penguin is so delighted and proud to be publishing Rangatira – an intensely personal novel and one that represents many years of intensive research. Paula has beautifully captured the voice of her ancestor Paratene Te Manu, as well as the sights and smells of Victorian England. You can almost feel the grime on your skin and sense the overpowering odours that assaulted Paratene and his fellow travellers in the streets of and . It really is a triumph of story telling".


Here was what regular book launcher, author/humorist/columnist Steve Braunias had to say:


Helen Clark was Prime Minister. Bill English didn’t stand a chance. Ian Wishart stated on Radio Pacific that Osama bin Laden had nuclear weapons, and that New Zealand was a likely target. Shakira. Spiderman. Gwen Stefani. Craig Marriner. The Lovely Bones was published, and so was Atonement, and the other significant cultural event of 2002 was that Paula Morris started work on Rangatira.

Nine years in the making, and now here we are, and here is the book with the stupendous cover image. Paratene Te Manu, Paula’s great-great etcetera, her tupuna, staring out at us with an even gaze, and speaking us to in an even voice in the pages of Rangatira.
Paula’s fourth novel is a historical novel. We have to call it that because it’s true, but it seems a shame. Historical novel  - the term itself is like mildew, something stale and unfortunate, old news. And it’s even worse when you say New Zealand historical novel. You instantly think, oh God, here we go, petticoats and pounamu, Penguin and plagiarism. You think, no fun.
But Rangatira doesn’t suffer from these suffocations, because it’s so vivid, so lively.  In 1863, Paratene Te Manu joined a select group of Maori on an incredible journey to England, where they were presented to Queen Victoria, toured London and Bristol and Birmingham, and performed the haka to sell-out, roaring audiences – you could say they wowed the natives. Bad things happened. One of the party was committed to an insane asylum. There were the terrible temptations of drink, and the even more terrible temptations of the Anglican church.
Rangatira is based on this true story. Instead of historical novel, maybe the more appealing genre it belongs to is the non-fiction novel. “Much in this novel,” Paula writes in the postscript, “is conjecture and invention.” Well, good. We say of amazing and unlikely things that really happen, You couldn’t make it up. But Rangatira is a novel, and Paula does make things up.
It may be that there are two central tasks for a historical or non-fiction novelist. The first is to conduct full and wide-ranging research. The second is to forget it.
What’s true and what isn’t is of no concern when you read Rangatira. You read it for the story Paula tells, for its momentum, its integrity, its ultimate sorrow.
You read it because you believe in Paratene Te Manu, in Paula’s character of Paratene Te Manu. He says of the way Maori were greeted in England: “We were strangers with green lips.” Later, he describes them as “carnival exhibits”. You read Rangatira for this freakishness, for the weird and fully engrossing circumstances of newly colonised and freshly dispossessed Maori in Victorian England, which is a very long-winded way of saying you read it for the story.
All novels are historical novels for the writer concerned. Their work occupies that foreign country known as the past. It was written when they were younger. By the time the book is published, they barely recognise the author who wrote it. They look back with wonder and even awe at their younger, industrious self, persevering, holding on, getting somewhere – getting here.
The book is finished. Good. Like all her friends and family and long-suffering colleagues at Penguin, I’ve been listening to her talk about Rangatira for most of the 21st century. I remember the first time she told me about it, when she recounted the story of her ancestor who left his home on Little Barrier Island and sailed to England to meet the Queen. The excitement and pleasure she had for the story remains in Rangatira – not a historical novel, not a non-fiction novel – a novel, crafted and shaped and felt.
Footnote:
Well put Steve, I am half way through Rangatira and enjoying it enormously.
Posted by Beattie's Book Blog at 6:35 am