A life in writing: John Grisham

'My name became a brand, and I'd love to say that was the plan from the start. But the only plan was to keep writing books". 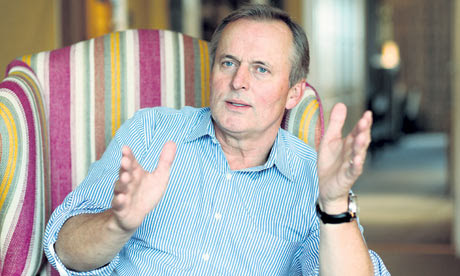 'I don't want to force my politics on my readers': John Grisham. Photograph: Eamonn McCabe
In the mid 1980s John Grisham, then a small-town lawyer and disillusioned member of the Mississippi state legislature, would fill the time between meetings and court hearings writing a novel about an ambitious young lawyer embroiled in a life-or-death fight for truth and justice. "It took me three years, and most of the time I thought I would never finish it. Eventually 5,000 hardback copies were printed and I was thrilled. But they did not sell out, it did not get a second edition, it was not published in paperback or picked up for foreign rights. Then I wrote The Firm …"
The Firm, Grisham's 1991 story of another young lawyer in a jam, was on the New York Times bestseller lists for 44 weeks, sold more than 7m copies and was made into a feature film starring Tom Cruise. "My first publishing experience was entirely normal and my second entirely abnormal," he says. "I responded much better to the second experience than I did to the first."
And, for Grisham at least, the "abnormality" of The Firm's commercial success soon became the norm. His subsequent series of legal thrillers has gone on to sell close to 300m copies and been translated into 40 languages. Nine of his novels have been turned into films starring A-list actors such as Julia Roberts, Gene Hackman, Sandra Bullock, Susan Sarandon and Dustin Hoffman. They have been directed by Sydney Pollack, Francis Ford Coppola, Joel Schumacher and Alan J Pakula. Grisham regularly features on literary rich lists with an estimated fortune of $600m and an annual income in the tens of millions. For most of the 1990s Grisham Day, when his new book went on sale, was a fixed point of the publishing year – to be avoided by other publishers and celebrated by bookshops.

"My name became a brand and I'd love to say it was the plan from the start," he says. "But the only plan was to keep writing books. And I've stuck to that ever since." His 24th, The Litigators, was published in the UK in October. Lighter in tone than much of his work, it features a pair of morally dubious Chicago street lawyers, Finley & Figg, who find themselves teamed with a young, burned-out corporate lawyer, David Zinc, in an unequal battle against big pharma.
Grisham first developed the idea as a sitcom script. "The humour was there from the start. When you work at street level you never know who's going to walk through your door. Life is full of fun stuff, sad stuff and crazy stuff. I survived as a street lawyer for 10 years and bumped into guys like these. I got to know them quite well."
Read the full piece at The Guardian.
Posted by Beattie's Book Blog at 6:38 am

I have read everything john grisham has written and was ,looking forward to this book. What a disappointment. I couldnt enjoy the rambling content. John was not at his best in writing this plotless story. I hope he is not suffering from writers burnout and we can look forward to a better book in the future